Getting Patchy In Here

Just relics today, but there's some thickness to these cars as all of them contain some patches. 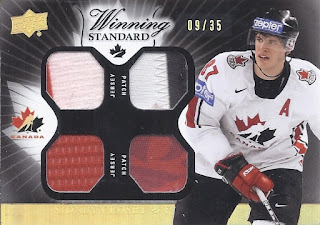 When I recapped the base relics on Tuesday, I remarked that the Crosby was likely my first hit of his. While my memory fails me as to the truth of that, I can certainly say this is my first Crosby game-worn patch. Looking at the pattern on the lower right, this one can be traced to one of the sweaters from the 2010 Olympics. That's going to be a very fortunate theme for the patches in this post. 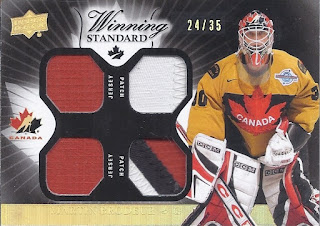 The origin of these patches is less certain, but at least I know this one isn't from the jersey Brodeur is sporting in the photo. 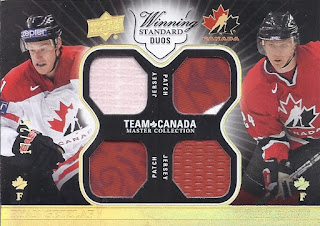 But the obvious Olympic patches return here, combining on a card featuring Corey Perry and Ryan Getzlaf that would be as nice for an Anaheim Ducks fan as it would be for a Team Canada fan. 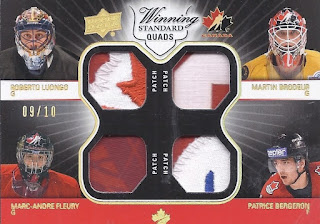 If 2 players on a card aren't enough for you, here's a foursome. If you're wondering how Bergeron snuck onto a card that features 3 goaltenders, it is because this card has nothing to do with positions - all 4 of these players are Quebecois. 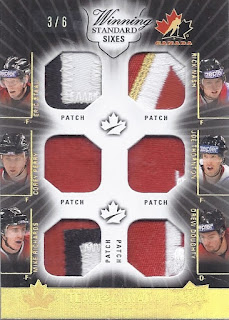 But this one is all about the positions. A six pack of forward on this one. The strip of gold on the Nash wins this one's patch wars. 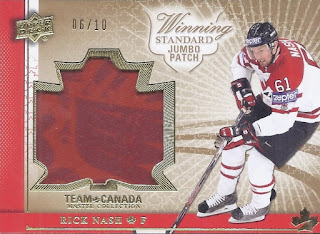 Even more Rick Nash here as we return to the single player, but up the size of the patch. And what a patch this is, obviously coming from the center maple leaf on the jersey. When you look at the full patch, this is from the wing portion in the middle of the logo, with a 90 degree rotation for some reason. 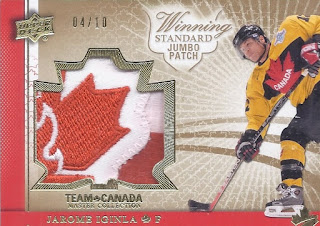 But where does this come from? It isn't a shoulder patch. This can be found on the reverse of the jersey, in the lower right. The logo features a maple leaf, with a flame in the middle above the Olympic rings. This is probably of a size to get 6 patches out of it, and this is the middle right portion of the patch.  An absolutely beautiful swatch from hockey history.
And there you have it! I'll probably take the weekend off from Team Canada and post my second S2 box, and return next week with nothing but autos. And there are some absolute doozies next week.
Posted by buckstorecards at 10:50