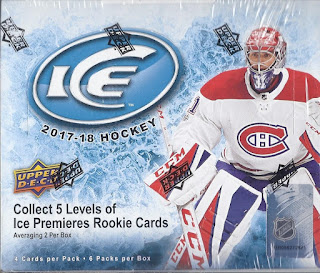 19-20 Ice dropped a little over a week ago. I would have tried a box. However, for a second year in a row, the base cards aren't acetate. That is reason enough for me to go a couple years back with some 17-18 instead. 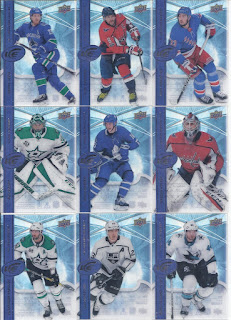 For some reason, I'm still unofficially working on the 1-100 base set for this. These, along with most of the others in this box, were needs for me. I'm still about 15 cards short, and those might be added to my set wantlist sooner rather than later. 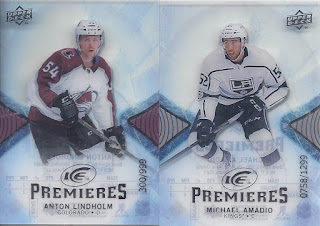 While Ice Premieres are considered part of the base, I really don't plan to add those to the set. But these were the two I got here. Generally, the higher the expectations of the rookies, the lower the print run. Both these guys saw action last season, but it was Amadio who spent the whole season with the big club. 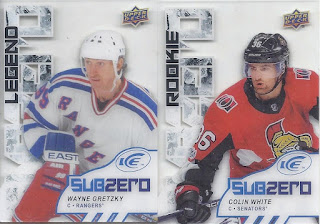 Sens content in the Sub-Zero inserts, but that White was a dupe. The Legend portion of this insert set is 1:60 packs, or 1 per case, so I did really well not only landing one, but landing a Gretzky. 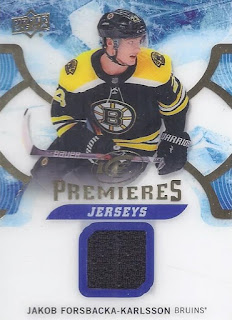 Not the most impressive relic hit, as JFK is already back in Sweden. His Ice Premieres was numbered /499. 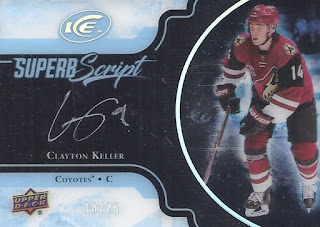 But the other rookie hit in the box - that's much nicer. Keller doesn't have the greatest penmanship out there, but the silver pen on a black background always looks nice on a card. And it is of one of the better young players in the league. It is a little hard to tell looking at the scan, but this is /25.

Definitely a winning box with the Keller and Gretzky!
Posted by buckstorecards at 17:00