I probably won't be busting any more Rookie Anthology. Given how agonizingly close I am to wrapping up the base set, it seems to be a waste.

So, let's bust some Playbook instead! 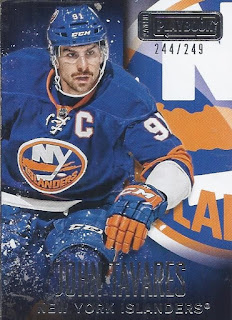 The brightness make it one of my favourite designs of a higher-end set. Such a contrast to the constant white with silver foil that Panini usually uses. 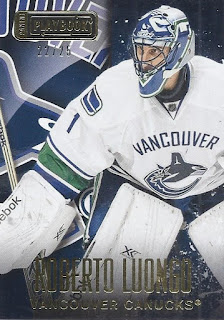 And I even got a bonus parallel! 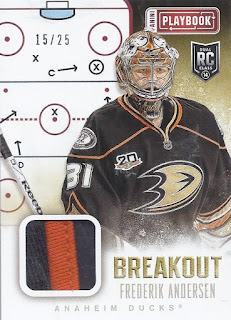 Off to the two actual hits, and I'm starting with a nice prime piece of Frederik Andersen's photoshoot worn jersey. Even if he is with the Leafs, he's still an active player, so this is a good rookie hit. I assume the piece is from the shoulder piping.

And here's the card that puts the book in Playbook. A silhouette relic, and second swatch and an acetate autograph. Looks fine to me! And it is a second player that is still active in the league! 2-for-2 with the rookies!

There you have it! SP Authentic 19-20 drops tomorrow, so I'll be showing off the contents of a box in my next post.
Posted by buckstorecards at 07:24