Heading off to the store to get some repacks has been a little more of a challenge recently. But fortunately, I can just order some on-line.

I'm going to recap these in terms of volume, which means I'll lead with the basketball repacks, then go to the football, and eventually the hockey. 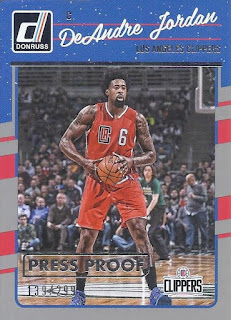 Here's a better look at the first of the visible cards. I can't complain about leading off with a numbered parallel. 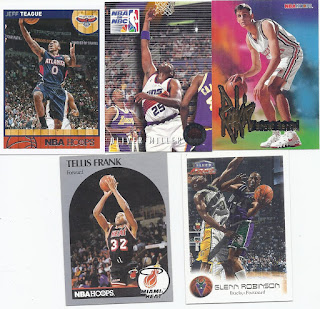 The count was off, and there were actually 22 cards, including the hit, in the pack. The Miller and Barry both are perfectly 1990s cards in terms of design. Tellis Frank seems like a guy for whom they transposed the names on the card, but he isn't a Frank Tellis, no matter how many times I think it is. 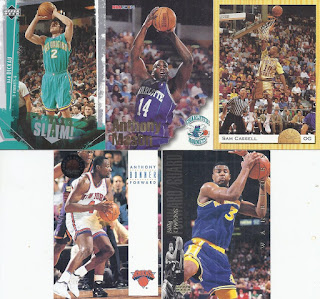 Your next grouping of 5. This was definitely the least interesting of the grouping, but I do like the Sam Cassell. 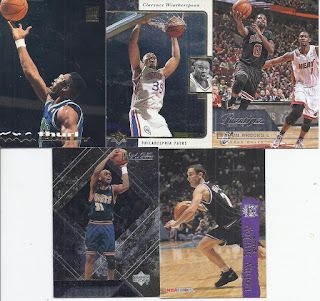 The Thurl Bailey is such an underrated photo. The darkened arena gives such a great old school feel to it. 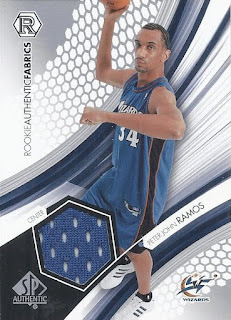 And your hit. I had no idea who Peter John Ramos was. He played only 6 games with the Wizards in the NBA, but did have a decent international career. He's now working back in his native Puerto Rico as a professional wrestler.
And of course, the chokeslam is his finisher. Why wouldn't it be? 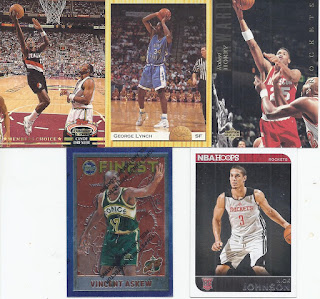 And the last grouping of 5 cards. Nick Johnson was the other visible card in the hanger.  Askew definitely came out on the wrong side of the protective coating placing. My favourite card in the repack is the Drexler, since I didn't expect to land any Members Choice parallels in this.

There you have it! Next up will be the basketball Surprise bag.
Posted by buckstorecards at 06:58