Let's see some more Series 1, and this being from my first pack(s) busting of Series 1. 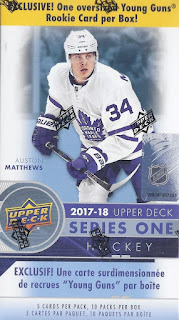 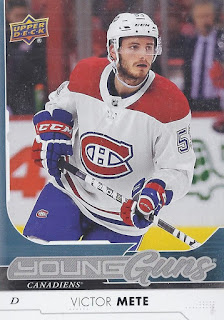 And here you have the Jumbo Young Gun! Unlike both entries for the Senators Young Guns, he's still with the team. He's seen action in every Habs game so far this season - not bad for a 19-year old 4th rounder. 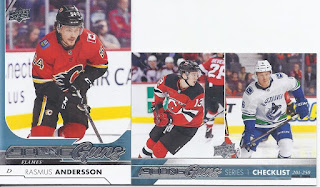 And the regular Young Guns portion included the checklist card. At least there are players on this one.

Let's look at some random base cards. 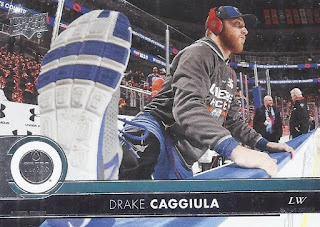 Just what I always wanted on a card - a close-up of Drake Caggiula's shoe. 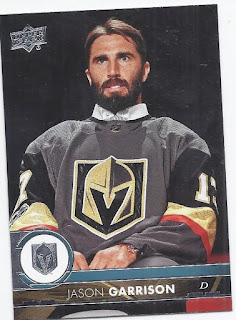 My first Vegas Golden Knights card! Jason looks like he's out there at gunpoint. 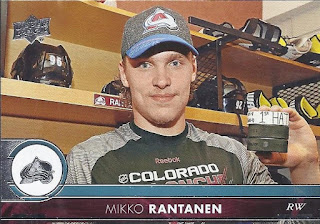 I really like the "pose with the milestone puck(s)" photos. 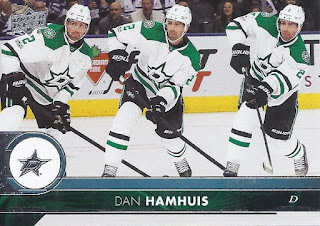 Multi-image cards make a return this season. There were some among the Canvas inserts last year - here we get them among regular cards. Anthony Beauvillier is another one who gets this treatment on his base card. 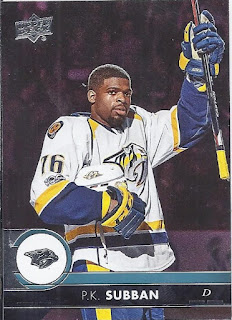 I don't know if this will remain my favourite base card once I've seen the rest of the set, but this will be hard to knock off the throne. It looks like a simple acknowledgement of the crowd, but the road uniform, and the tearing up show that this was from Subban's first game back in Montreal. A really great moment worthy of cardboard preservation.

There you go. That's probably the last of the non-singles I'll purchase from S1, having gone all-in on building OPC. Probably something repack-related next time.
Posted by buckstorecards at 09:27