The Bills are 5-2 going into a prime-time appearance, as predicted by absolutely nobody. I'm going to enjoy the ride before the other shoe drops and reality hits, and take card of this perfect time to show off some Bills cards from a couple recent case breaks - Certified Cuts and XR.

I like the base look on Certified Cuts with the mostly full-bleed design. These are pretty much the three players you're guaranteed to see in the early releases. I'm guessing Jordan Matthews will replace him, with it being Kelvin showing up in the post-season releases. I'd love for it to be Micah Hyde. 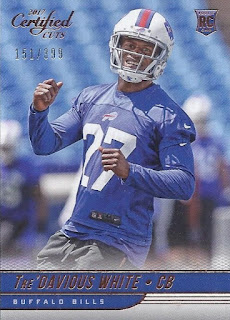 Tre'davious White to /399. He's been a pleasant surprise as a rookie starter. 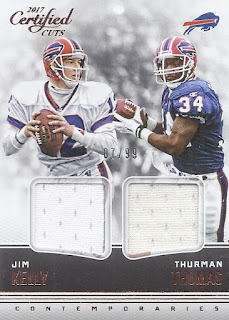 And my only hit out of Cuts was a nice dual relic. The presence of Thurman probably consigns this to the Bills binder as opposed to the 2/14 collection, but I won't complain about a nice dual relic of pair of HOFers from the good ol' days.

XR. They're shiny. Kinda like SPX from Upper Deck with the X being part of the design. 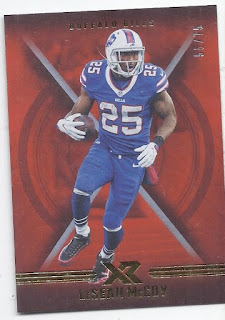 But I did land a nice parallel in this break. It scans red, but this is an orange. 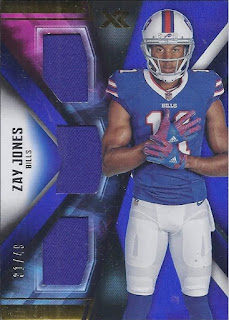 One of the 3 Bills rookies that are all over this year's sets, along with the previously-seen White and back-up QB Nathan Peterman, makes an appearance on a relic. He hasn't been impressive so far, being near or at the bottom of the league so far with catches per target rate. Still, he is just a rookie, so I won't read into it too much with the team winning. 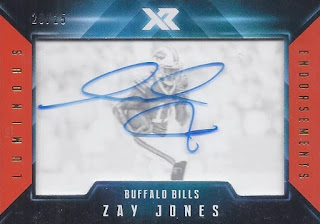 And here's Zay again. I really like this design - it makes me think of the Topps Strata design, with the acetate autograph being placed over a photo. I've got autos of the other two on the way, so at least this will be an easier season for acquiring autos of the new guys.

And there you have it!
Posted by buckstorecards at 12:34