Time for a semi-regular post recapping some new 2-14 cards for that binder. I also received a new one in the mail via a sportlots PWE, and I'm throwing that one in here as well, since I don't really want to do a one-card-only post for it. 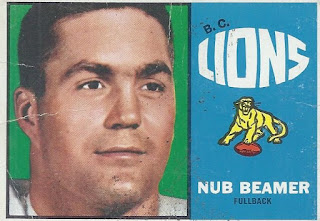 Finding vintage CFL at the Expo isn't easy, but it is a feasible mission. My google-fu lead me to learning that Nub Beamer was a 2/14 baby, and that he had cards. This one is from 1964, and according to his wiki article, he had already retired from the game in 1963 due to a pair of concussions. This is my first card of him, and is also now my oldest CFL card in this collection. I'd complain about too much border/logo, but I don't mind it too much here with the photo being a head shot. 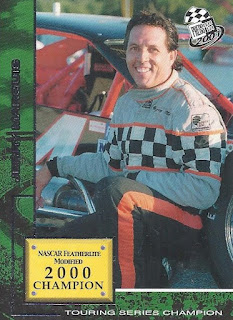 And one that was on my Top 10 wantlist for a bit finally dropped off when a reasonable cost/shipping one showed up on sportlots. Jerry Marquis joins a handful of auto racers in the collection, as part of the miscellaneous section. 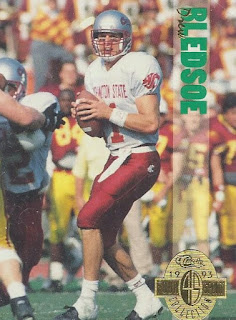 One of those cards I'm amazed I didn't have. But now this Classic of Bledsoe is there. 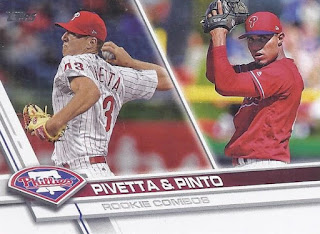 This is the second card of Nick Pivetta, and my first base card of his. He made his debut in the collection not that long ago with a Bowman autograph of him while he was still a member of the Washington Nationals. He's from British Columbia, so he could also move into the CanCon collectin as well. I think he became the first Canadian in the baseball portion of the binder when I added the auto, but I'd probably have to check it in a more detailed manner than relying on my memory. 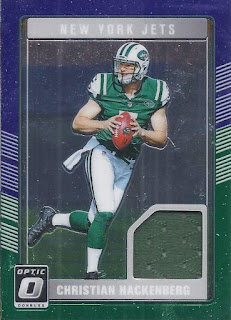 And a sorta-shiny relic wraps it up. His football-reference stats remains blank, so I guess that means he has yet to receive a single snap so far in the NFL. That sounds promising. I guess he holds a mean clipboard.

And there you have it!
Posted by buckstorecards at 08:26