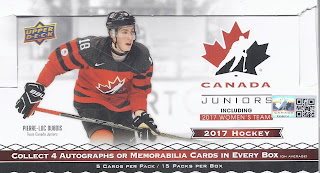 I didn't buy any Series 1 Upper Deck at the show. I concentrated more on doing damage to my OPC set needs to consider that. With the purchases there, I'm now one away from finishing up last year's set, and 2 from this year. But I did bust a box.

The Team Canada Juniors set is kinda like Bowman hockey, with the focus being on players who have yet to reach the NHL and qualify for a card, retired veterans, and women players, with the common characteristic being they all wore the maple leaf.

I've already busted a pack to show off the base cards, so let's see the inserts and parallels. 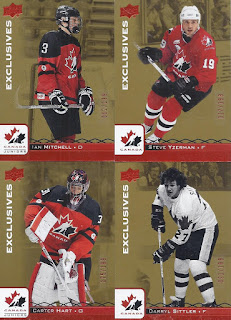 A quartet of numbered parallels to start off. With a smaller total print run compared to flagship and higher numbering, these are easier pulls with all parallels falling 1:3 packs. So, that was 4 of the 15 packs... 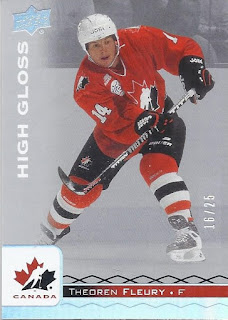 and here's the 5th of the promised parallels. These are also higher numbered, coming in at /25 as opposed to the usual /10. While I didn't like the overuse of the gold background in some releases last year, it works a lot better here, considering that the gold medal does go to the winner of many of the competitions the photos originate from. 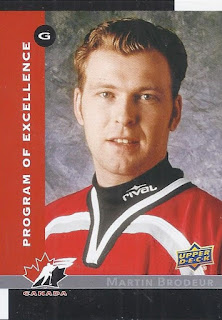 The POE is just a generic insert set giving more cards to various subjects. The Brodeur is a retro variation, which fall at 1:25 packs - so they're not guarantted per box. 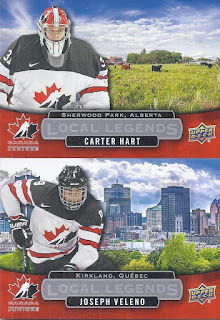 The local legends insert includes a cityscape, and that's enough for me to be a fan of it under the 1993 Leaf rule about cards I love. 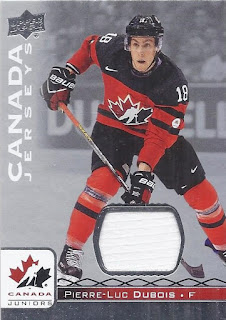 Hey! It's the cover boy of this release! He was a 3rd overall pick of Columbus, and has made his debut in the NHL this season, and has a Young Guns card in the Series 1 release. 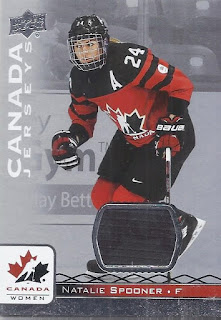 And a hit for the distaff side as well. 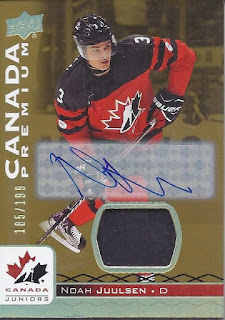 And the first of two patch/autos in this box. Juulsen was a first rounder for the Habs in 2015, and it did seem like he'd get a shot with the big club - until a preseason injury. 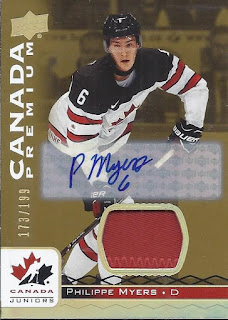 The second one is of an undrafted prospect in the Flyers organization. On paper, this seems like a dud hit, but the Flyers fanbase does seem pretty hyped about him. Even if his career in the bigs doesn't go as hoped, at least he has decent penmanship. 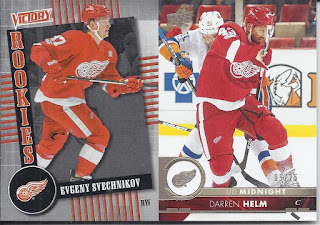 And the Expo only bonus pack. I guess I did bust some Series 1 at the show. Kinda. Sorta.

There you have it. My needed base cards have been added to the want list at the side. Up next, a box of my comfort food - 2013-14 Rookie Anthology.
Posted by buckstorecards at 13:05