Most of the post over the past week or two were pre-written, and I took the time of blogging silence to move my Ottawa Senators collection over onto tcdb. While the Alfredsson portion of it was there, very little else was. I was waiting until everything else went in before finally getting around to posting a pile of recent Senators acquisitions, mostly from pick-your-team style group breaks. 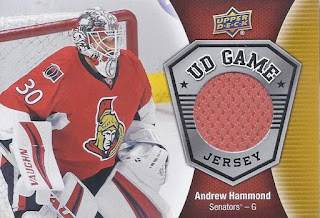 Hammond may be the perfect example of a one-season wonder, but I'm going to be babbling about his insane 14-15 run where he willed a not-so-good Senators team into the playoffs. 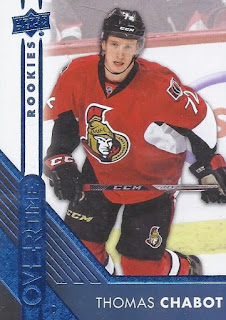 This will be the only non-break card in this series. There was a small ding in the corner, which might matter to the GEM MINT types, but I'll take advantage of it to add this rookie parallel to my collection for $1. 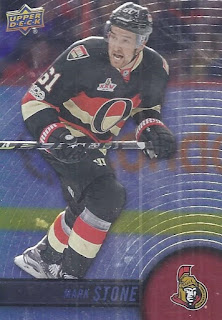 Yes. There were Tim Horton's packs in the break. Don't question it. 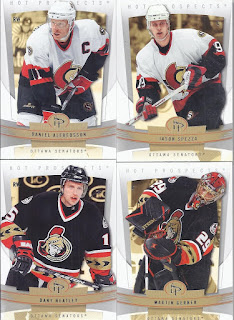 Surprisingly, I actually needed the Alfredsson card that was part of these base cards from 2006 Hot Prospects. 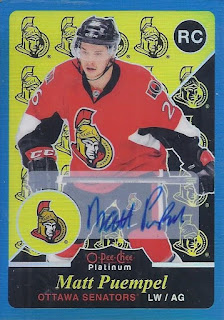 I'm not too crazy about the white box that makes it look more like a stickergraph than an on-card. While Puempel isn't the autograph people want to see come from a 15-16 release, it was perfect for my collection. 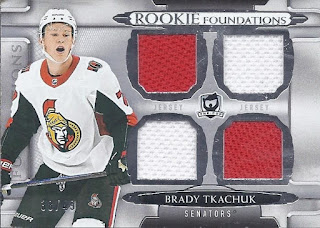 Even if they're just one-colour swatches, I'll always welcome cards from The Cup into  the binders. 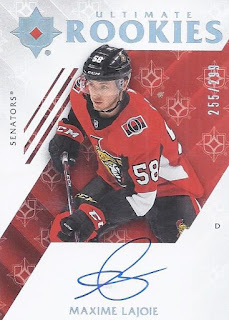 The big box for me was the box of 18-19 Ultimate. There's four cards in the pack, and I got ended up with both of the autos. I can't really parse Maxime Lajoie out of that - it looks more like an ampersand, but an auto is still an auto. 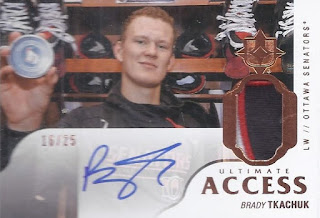 And this is the second auto from that box. While I've added a few sticker autographs to my collection already, this is my first on-card autograph. It mixes nicely with a piece of the shoulder patch (which you can see on Lajoie's photo), and an interesting photo with what I'll assume to be Brady's first career goal to make a really nice looking card, easily my favourite of his.

Next up, some SP Game Used, some SPX, some Allure and some Synergy.
Posted by buckstorecards at 05:30