Another box of Chronicles - Part 2

Here's the end of this box: 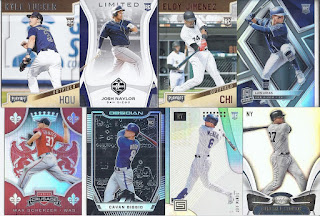 Getting the final non-hit pack out of the weigh early. But no complaints with a new Cavan Biggio card fro the the Jays collection. I really seemed to be an Eloy Jimenez magnet with this stuff, but never landed an auto of his from it (although I already had one from Heritage Minors). 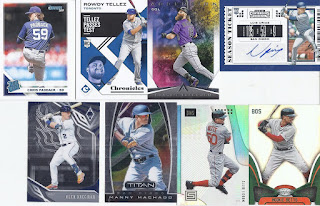 3 Padres cards, including a hit, certainly make this a Padres hot pack! This also the second time in this box where the final two cards in the pack were of the same player. 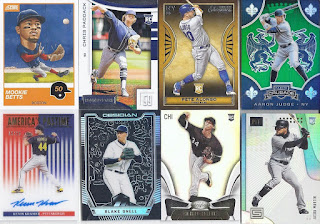 That's three straight Mookie Betts cards, and as you might suspect, the big head one is my favourite of the bunch. That Aaron Judge looks really nice with the green crusade background (/50), and there's the final auto as well on one of the more interesting designs in the product with Kramer. That's a gold /25 parallel as well.

And there you have it!
Posted by buckstorecards at 08:44