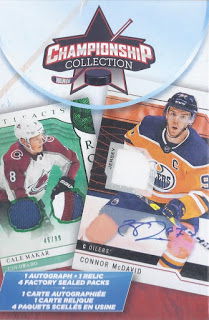 Unsurprisingly, these didn't last long on the shelves at Wally World. I guess I lucked out walking into one that still had 4 of these on the hangers. And I got all of them to hunt Pre-Parkie autographs.

But first, here were the pack contents. 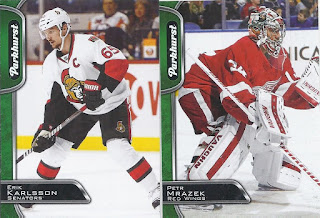 Although I'm sure I've pulled both before, I will still highlight a Senators card and a 2/14 baby. 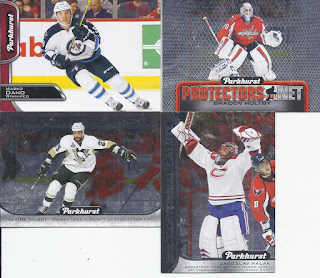 The insert/parallel content in the the Parkhurst packs was pretty horizontal, but the vertical card was easily the best since they didn't silver/chrome out the dejected Ovechkin cameo on Halak's card. 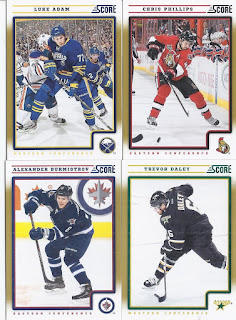 Another Sens appearance among the Gold Rush parallels in the Score packs. 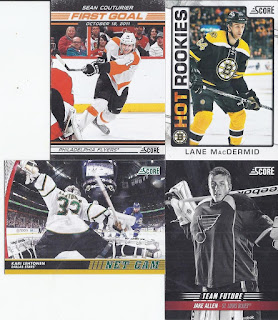 And it was all over the place for inserts/hot rookies in those, with 4 different ones represented. If I recall somewhat correctly, the Team Future were among the tougher pulls in these releases. 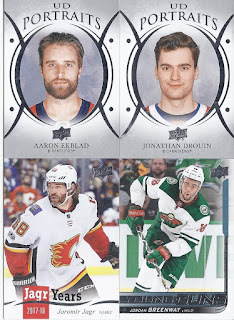 Series 1 of the flagship release provided a pair of super-dull Portraits inserts, but I did get a Young Gun (even if Greenway seemed to follow me around last year), and a great Jagr insert saluting his handful of games with the Flames, so it balances out. 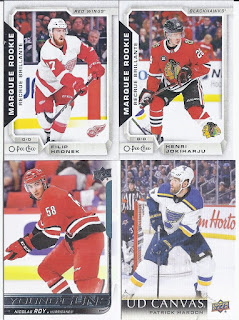 And your inserts from Series 2. Pretty blah here, but at least there were no Portraits cards.

And let's see the hints. 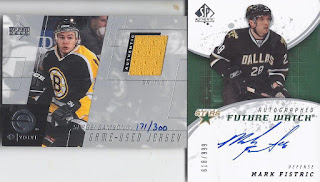 Like before, we head back to the earlier days of relics, with this Samsonov coming from a 2000-01 release. Fistric did have a decent career, and Future Watch autographs are always fun. 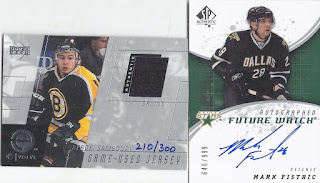 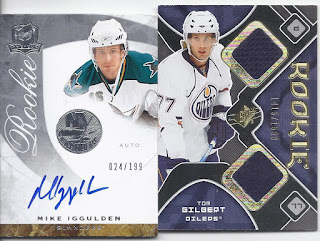 That's a nice way to break a streak. Iggulden only played in a dozen NHL games, but I was not expecting to see any sort of autograph from the Cup in this, even of a short-term player. Gilbert did carve out double-digit seasons in the NHL, and has been overseas the past few years. 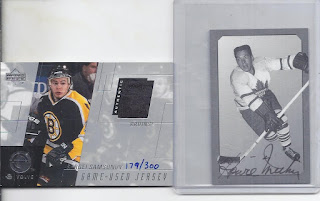 I guess this finally paid off. Fortunately, I noticed that there was a smaller than usual card in this repack before I noticed the third Samsonov relic, otherwise its appearance might nave broken me. That's Howie Meeker on the autograph, and as I type this, he's probably the only member of the pre-Parkie checklist still alive, having turned 96 this past November. He was also born in my hometown of Kitchener, so there's a local tie to this auto.

I can't imagine seeing these repacks again, but that auto was a nice way to go out.
Posted by buckstorecards at 06:01