About a month back, I made the foolish decision to go for the complete 13-14 Rookie Anthology set. Not just the regular unnumbered base, but the 96ish cards that are technically base, but comprise the rest of the set and are all rookie/relic/auto /249.

Here's two more towards that goal! 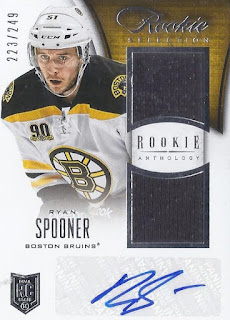 Ryan Spooner was a second rounder from Boston, but if I remember pricing at the time was pretty well hyped. Or I'm confusing him with Dougie Hamilton. Either way, he's overseas now. I was going to say he was playing, but that's probably not true about anybody in this set. 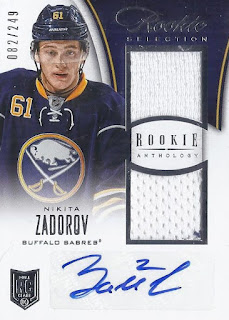 But Zadorov is still active over on this side of the Atlantic, with the Avalanche. He went there as part of the trade to send Ryan O'Reilly back to the Sabres. Not the best trade for the Avs in the long run, but at least this branch of the trade tree is still in Denver.

And there you have it! There's still 20 more left, with a couple big names left. That Tarasenko is going to be tough, especially since it was a redemption originally. But everything else seems doable.
Posted by buckstorecards at 02:30