Today, I'm catching up in one collection by posting Senators cards from a bunch of group breaks from the locals at C&C. On tap are cards from a case break of Trilogy, one of SP: Game Used and a 'Monster' break, which includes about 25-30 boxes. 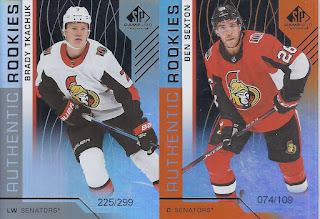 SPGU sees what will probably be the only appearance of Ben Sexton in the collection. He played 2 games for Ottawa in 17-18, and was sent to the Penguins in a low-level trade back in December. He was originally a 7th rounder of Boston, so any NHL experience at all is uncommon at that level. He was only the 7th player in the 2009 7th round to play at least one NHL game.

Max Lajoie was the big winner here, with a trio of hits. This includes my second autograph of his, and the first of him with Ottawa. 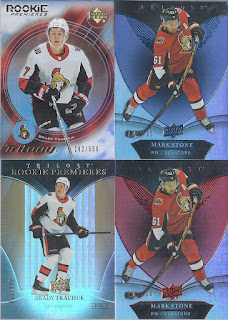 There wasn't too much of note in the Trilogy break, but there's a couple more Brady Tkachuks for a developing PC. 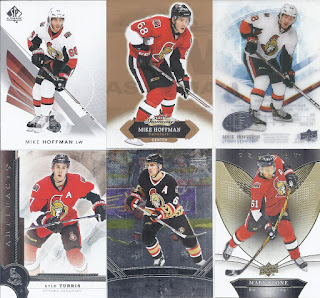 Off to the Monster, and here's just a little taste of the base cards in there. For someone who left the Sens under the cloud he did, perhaps I should not have had half the cards being Hoffman for this scan. 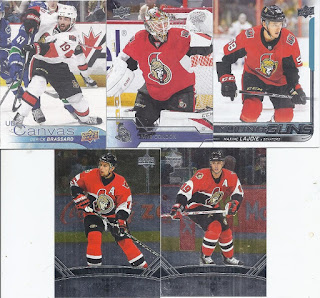 Here's a sampling of the inserts and SPs from the boxes as well. Surprisingly, I hadn't acquired that Lajoie YG card before this. 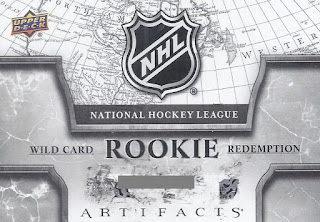 This card will turn into a Drake Batherson at some point. 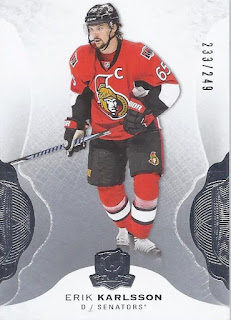 It may only be a base card, but any appearance of a card from The Cup is worth highlighting. That is despite the rather basic design in 16-17. 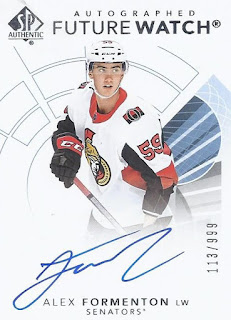 I only landed two autographs in the Monster break. This becomes my second Formenton auto, joining another on-card auto from Ice. 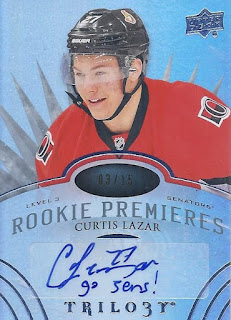 Autograph #2 is a pretty rare one, numbered 3/15. While Lazar isn't saying "Go Sens" at this point, these inscription autos remain chase cards in Trilogy. And this wasn't even the big card in the break for me. 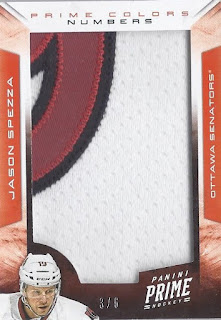 That is because this gorgeous patch card was the big addition to my Sens collection. Not only is this large patch numbered to just 6 copies, one can look at it and know exactly what portion of the card it came from - the lower right portion of one of the numbers on the shoulder of the jersey. What a keeper card for the Spezza portion of my Sens collection!

And there you have it! More group break stuff next post with some Artifacts.
Posted by buckstorecards at 08:53