Seems like a good way to describe a group of cards I picked up as a lot, when I only really wanted 2 cards in the whole group. 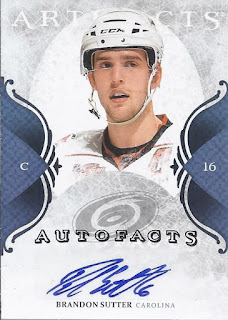 The big draw in the group was this Brandon Sutter for my 2/14 collection. He's made two stickergraph appearances in the Artifacts Autofacts subset, and I've got both of them. This is my 56th card of his, putting him 100 behind Marian Gaborik for the hockey lead. 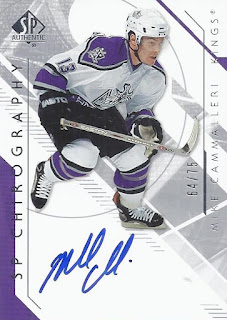 And the other card that was of interest to me was a /75 of Mike Cammalleri for my next mailing to TMM.

So, what else filled up this lot of cards? 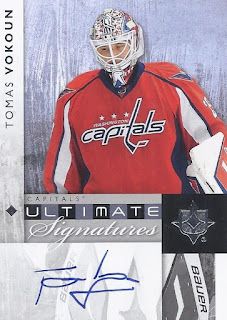 Well, this could be considered somewhat closer to another want from the group - an on-card autograph for the mask binder. 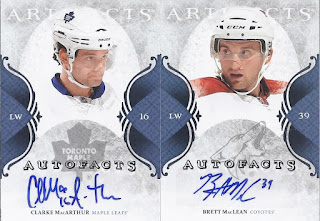 Let's flash back to the Sutter, and two more autographs from that same subset. One of someone who is still active, along with one of someone who only played a handful of games. Clarke's is kinda interesting. I like how the A stands alone in the middle of the sticker. 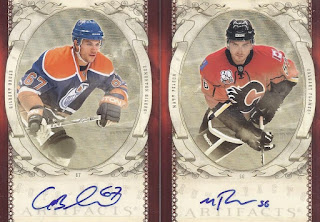 More Autofacts. The circular frame design is a reminder of this year's Ginter release. I just with they'd used a bigger font for the text on the front. The player's name is on the left, the number is on the bottom and the team is on the right. 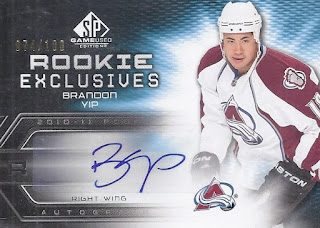 The only horizontal card.

The package ends with a trio of Future Watch autographs from SP Authentic. If you'd look into the Future when these cards came out, you'd know that Torrey Mitchell is the only one of these three still in the NHL at the point.

And there you have a bunch of random autographs.
Posted by buckstorecards at 13:32