It has been too long since I've dipped into my "COMC to be posted" box. Today is as good a day as any. 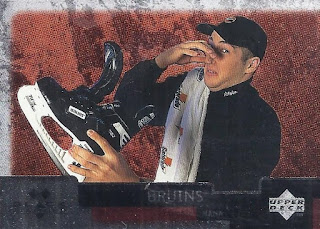 I'm not sure how many photos were taken of Cameron Mann this day, but they inexplicably opted for this one. I'm not sure who it was that told Cameron that this was a good idea for a photo, but they truly were a cruel bastard. 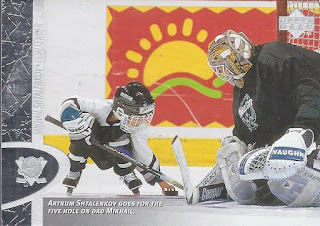 One of the youngest people ever featured on a hockey card? Now, if Artrum had gone onto a hockey career, this could be like the infamous Sylvain Turgeon/Patrick Kane card. 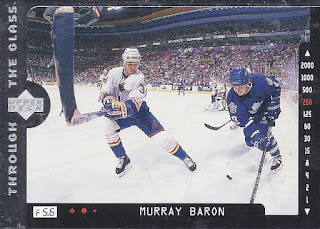 Another neat photo. Looks like Murray needs to retape his stick, though. This is from the same set as the Shtalenkov, which should send a card photography fan like myself searching for more. 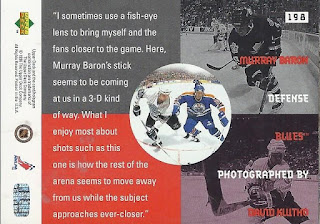 I like the back has more to do with the photograph than the player. 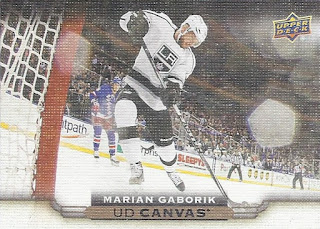 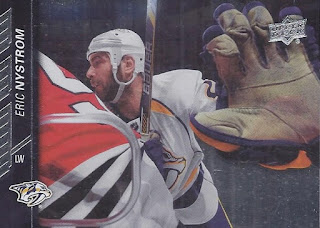 And the final one is the e-pack foil board parallel of Eric Nystrom. The regular one was my favourite 2/14 release of the previous year, so it just seems natural that I'd add this one. Fortunately, since there was a partnership with COMC on these, it was easy enough for somebody else to pull it from an e-pack, and then move it to COMC where I could get it for 30 cents.

And there you have it!
Posted by buckstorecards at 08:27