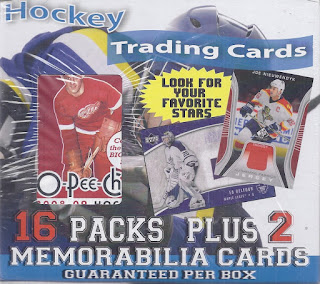 And of course, I must try it out. These were the packs contained within:

For those inept at math, that's actually 17 packs. 18, if you count the penny sleeve housing the two relic cards.

Nothing too recent, but that isn't necessarily a bad thing. I'm not sure if I'll cover this box with 4-5 straight posts or break them up, but today is as good a day as any to start these. And I'll start with the MVP. 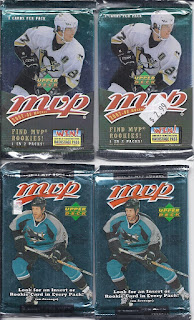 While I'm not a fan of the border intensive sets, I do find the packaging interesting since these two are facing off in the finals. And it gets the sets that are the least interesting to me out of the way in the first post. 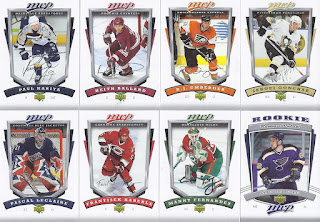 The Thornton packaging is 2006-07, the Crosby is 2007-08. And you're getting right into my problem with many of the MVP releases. Too much border to go with a tightly cropped photo. At least the promised rookie card is of someone still active in the league. A couple of mask binder cards are the other highlights here. 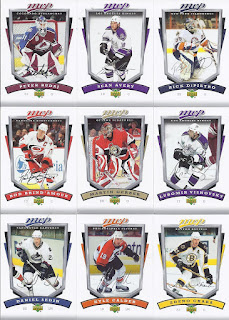 No insert. No rookie. But an extra base card. So, the packaging might not be as accurate as one would expect. At least I got a Sens card from the MVP packs. 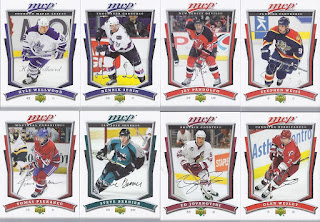 And now onto the 2007 packs of MVP. A slight change in the design of the photo frame, but I still found myself checking and double checking to make sure I got the right year on this. You really shouldn't have to do that with sets in consecutive years. The highlights here are the throwback Leafs logo, and my learning that Glen Wesley was still playing in 2007. 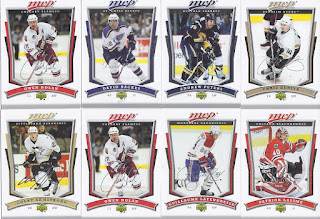 The second pack was a little more interesting at least, for good reasons (Rangers alum Andrew Peters and the Chicago version of Lalime's Marvin the Martian mask), and bad reasons (Owen Nolan dupes in the same pack)

At least these are done with.
Posted by buckstorecards at 14:03