It feels like it has been a while since Night Owl announced a major giveaway in the form of 5000 cards in 250 card random lots. Since Greg called these repacks, I had to be all over it. They showed up a week or so ago, and I shifted the 250 cards immediately into one of those cubes that previously housed other repacked cards, with plans to work through them in 50 card lots.
Unlike with my usual large repack posts, I'm not doing these consecutively, but I'll get to scanning all the cards eventually. 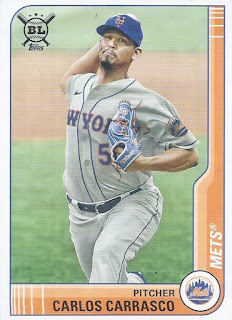 If this was a traditional repack post, I'd call this the opener. I said to also consider this give away an opportunity to hit me back for some trade envelopes I'd sent Owl's way, so there was a nice selection of Mets in this. 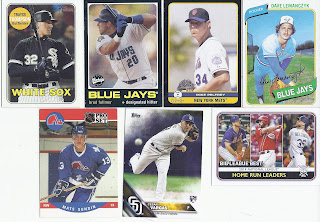 And I'm scanning everything in the mailer! Because I want to! While there weren't as many Jays cards in there, there still was a nice amount. Dave Lemanczyk looked far more stylish in 1978 than in 1980. That Mats Sundin was the only hockey entry in the mailer. The Vargas has a nice photo choice to go with the design, which is even nicer since that card and its parallels were his only big league appearance. 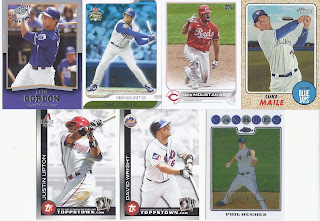 Timelime and Focus battle it out for the "set I rarely see in repacks" title in this portion. Moustakas' card proves that cards make their way into repacks quicker for Night Owl repacks than ones I find in the retail wild. Chrome really didn't translate too well for Yankees unis in 2008, giving their home pinstripes a road grey tint. 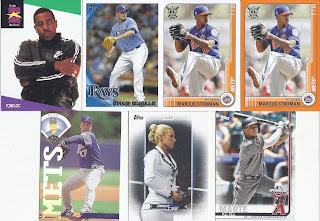 The non-baseball portion really shines through here. Tone Loc is obvious, but did you know that Lana was in a girl group before her wrestling days?
If you winced at the band name, be warned the music itself might be worse. 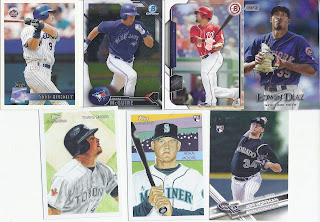 More Mets! More Jays! I think I basically ignored Stadium Club in 2019 (after building the base set the previous year), so any content for my team collections from that is welcome. Even if they aren't Perez-era Diamond Kings, drawn cards are also pretty nice to find, even if that means someone went through years and years of training, practice and experience to draw Travis Snider. 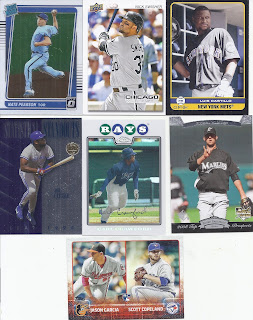 The Joe Carter card is from 1994, so naturally, his specific statistical standout would be being the second player to walk off a World Series win with a home run. The Carl Crawford looks better than the Hughes, and it should - that's a nice shiny refractor. And just like with all the multi-player cards in this, of course that Copeland counts as a team collection addition. Why would it not? 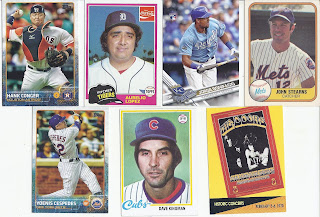 There's the final non-baseball card of this portion, but there will be more to come with Part 2. This is probably the array of cards that will have the most vintage-y stuff in it, and really does contrast nicely in alternating for with the more recent stuff. Despite the Mets content here, the big winner is going to be the Coca Cola issue in this group. 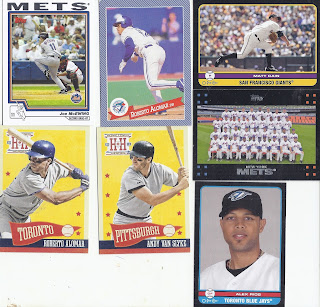 I'd probably like the Alomar content here more had he not been on the list of people banned from MLB, in his case for sex pestiness. Thankfully, a nice team photo, Super Joe, some O-Pee-Chee content (minus the French) and a non-Alomar card from a favourite set of mine, Hometown Heroes make this a little brighter. 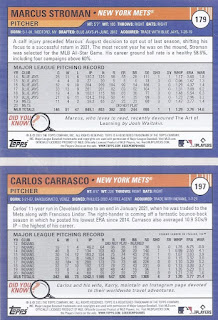 One of my favourite features from the last 2 Score NFL releases was the "Fun Fact" on the back. If I had known that the 'Did You Know' was on the back of Big League, I might have picked up a pack or three when I saw these at Walmart.
But at least that gives me one more thing to scan in these!
50 cards down! 200 more to go!
Posted by buckstorecards at 18:24