The CFL season kicked off on Thursday night, but I really don't consider it to have started until the Tiger-Cats have played their first game. Which is tonight in Regina. So, here's a bunch of epack CFL cards that have shown up over the past few months. 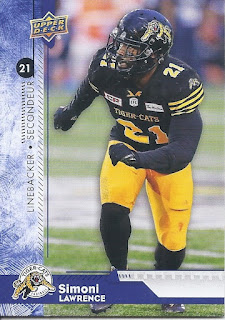 Most of the cards are out of 2019 releases, but here's a blue parallel from 2018. These ones are e-pack exclusives, and here we see Simoni Lawrence, who has been a defensive beast for Hamilton for the past several seasons. He's been the East's top defensive player for 3 seasons since arriving in 2014. 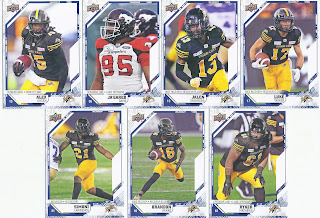 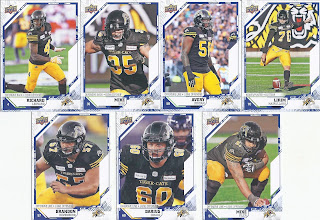 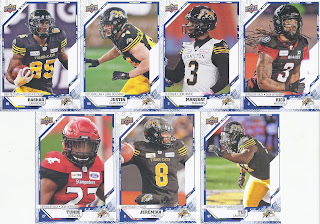 Here's a 2019 team set of those blue parallels, which, while not as inexpensive as some of the hockey entries that flood COMC, were reasonably priced enough that I can put this team set together. 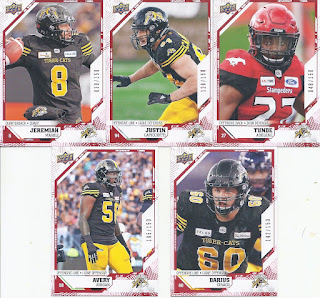 Some red parallels. I think these were all through epacks I either opened or traded for on UD's site. 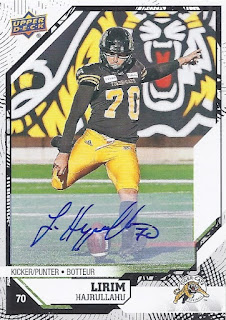 And a kicker auto! For my team PC as well! What a perfect card This I know was pulled from a personal e-pack. Lirim has been bouncing around NFL practice teams and training camps since this card was released. 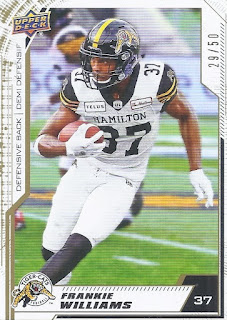 Let's end with 2020 stuff. Chronologically, there's no choice, as 2021 still has to hit the market, if it ever will. While this does look like it hits one of my football sweet spots - a defender with the ball - Williams was also a  punt/kick returner for the team, so it is far more likely this photo is from that. 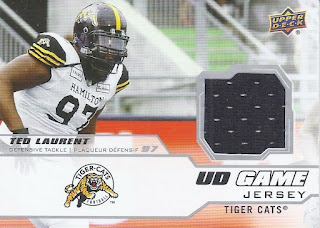 Another hit is a fine way to end a three-down post.
There you have it!
Posted by buckstorecards at 10:30