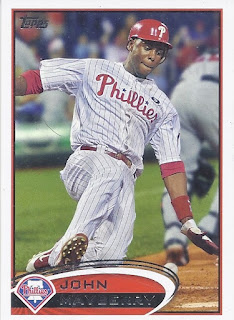 The other side! I love the framing of this picture, with it managing to come off as a  'play at the plate'  photo, even with the ball off target, the catcher up the line, and a probably unnecessary slide. 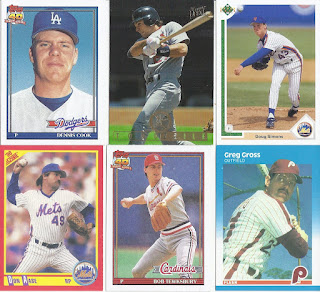 Two Mets open up in the first group. Doug Simons comes out of the Final Edition set, which I am totally counting as one of the update cards in this repack. 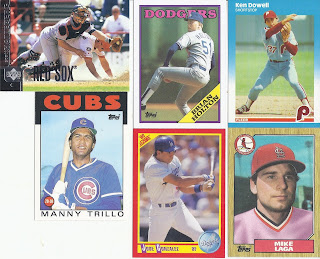 There's another infamous junk wax card - the Mike Laga pink jersey airbrushing. That's another one that I was surprised I hadn't just picked up for the heck of it ages ago. Manny Trillo provides the Update content here, and there a little more exciting example of a play-at-the-plate here than with the opener. 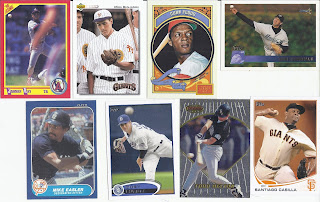 And the final cards. I know Golden Age wasn't really a baseball release, but the Curt Flood is still a beauty. There's Wrigley ivy behind Henneman on his card, to go alongside his rather unflattering expression. Mike Easler provides the Update content here. And that Mike Benjamin is another rather famous photo, with both the throwback uniform and the tiny glove. It is a really nice card, but if I had one complaint about the picture... 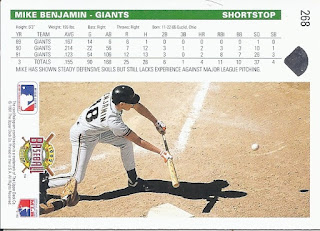 it would be that it distracts from another pretty great photo on the reverse of the card. The angle makes it look like the ball is a couple of inches off the ground, but the shadows tell otherwise. It is also an angle that one really doesn't see much on bunting photos. At least I hope that he's bunting on this pitch.
There you have it!
Posted by buckstorecards at 09:12