Today, I reach into the mailbag, and pull out a recent mailer from Dennis @ Too Many Manninghams. This one 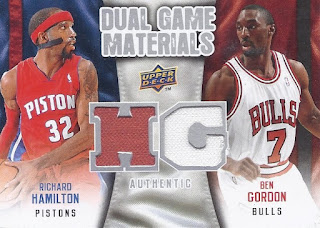 was all over the place, but that just means a lot of my collections get bumps.Only one basketball card in there, but it does add a new relic to that collection with this shared Rip Hamilton card. Interestingly, Gordon would move on to play for Detroit, and Hamilton to the Bulls. They'd be teammates at one point, so this isn't previewing a future trade. Which would make this card even more interesting. 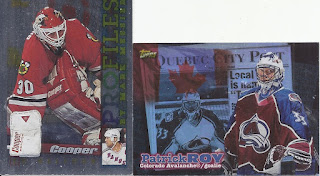 Here's a pair of Hall of Famers bound for the mask binder. And no, the Quebec City Post is not, and never was a thing. 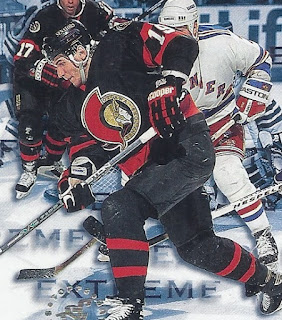 A single Sens card is still a new Sens card. 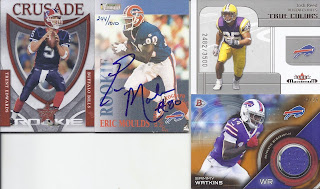 The volume picks up with the football content. I'm sorta surprised that this is my first autograph of Eric Moulds in the ol' collection. He doesn't have a lot out there, especially when compared to recent players, but still has enough that I probably should have had at least one considering his 8 years with the team. Watkins relics are not new to collection, as this is my seventh. 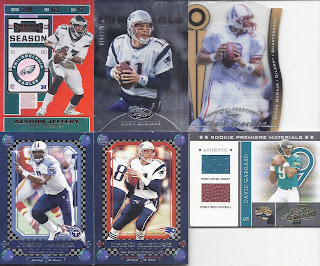 Here's the 2/14 stuff. With the recent boost I made to the Jim Kelly portion of that PC, it is only appropriate to see some of the other QBs get appearances. Drew Bledsoe stands at 155 cards with these two, but he's still third overall behind Kelly and Steve McNair, the latter also up two to 178. That acetate chain reaction card is /3000. David Garrard closes in on the century club with 96. Alshon leads the non-QB portion of the collection with a solid 130 cards. 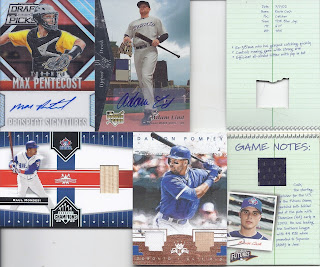 Blue Jays hits. Max Pentecost was thought to be the Blue Jays catcher-of-the-future for several years,  before Alejandro Kirk and Gabriel Moreno moved into that role. Adam Lind had a decent stint in Toronto, and he also managed to have one of the more legible autographs in recent team history. I think I like the Kevin Cash more for how young he is in the photo as opposed to the swatch. 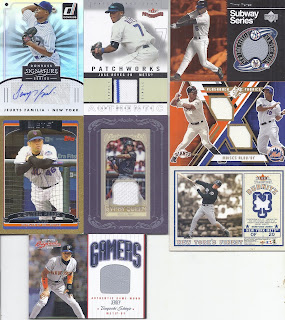 And some Jays hits also deserves some Mets hits. 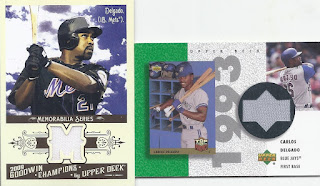 Finally, some Carlos Delgado, who hits both worlds with his relics.
There you have it!
Posted by buckstorecards at 11:00