Much Ado About Murray

Back to the COMC mailer, and today, it is the Jamal Murray content contained within. 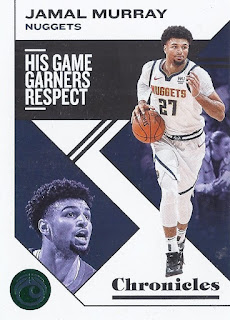 If the content had a theme, shiny might be the term one could use to describe it. But then this would be the outlier, as the only thing shiny about it might be that green foil used to indicate that this was a parallel. 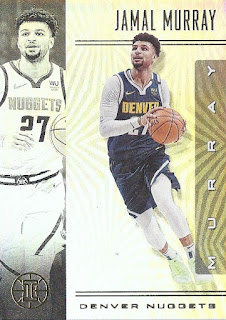 I can't use parallels either, as this base card, featuring one of my favourite looks (two images, not the same and with different jerseys) appears. 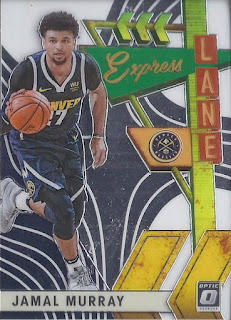 And there's also an insert to throw that off.  And it isn't one of the shiny parallels either. 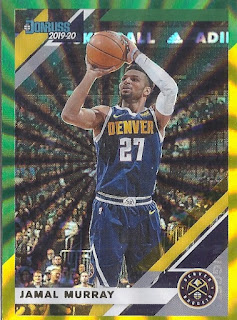 But here's some colour - a Holo Green and Yellow Laser parallel, that looks loud enough to have come from an Optic release, but this is just plain old Donruss. 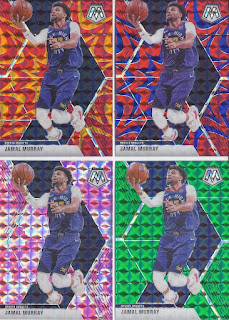 Mosaic! There's a product with some load parallels in their releases.  Going clockwise from the top left, there's a Reactive Orange, Reactive Blue, Green and Pink Camo version of the base card. 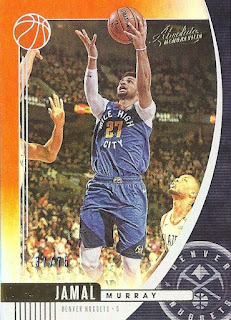 This orange parallel isn't reactive, but it does provide the only numbered card from the break, and it also puts me at a Dalmatian-worthy 101 cards in his PC.
There you have it!

Posted by buckstorecards at 15:38