The long-delayed high-end set dropped a week ago yesterday, and I grabbed the Raptors in a case break of it. Although their rookie content was non-existent in 18-19 releases, I figured I had a decent shot at landing a nice card in this release, since there was more veteran content than most releases. 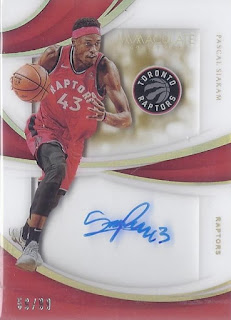 Yeah, that's a pretty nice Raptors card. Siakam had pretty much been relegated to sticker dumps over the previous two seasons, before the basketball world realized that there's a pretty special player that developed into a star in Toronto. I remember thinking after all the trades that I was elated that Siakam, along with VanVleet and Powell, were staying in Toronto. And he was a major factor in bringing the trophy to Toronto. It is a little hard to see in hand, but the front of the card has a shadowbox quality.

And that Siakam wasn't the best Raptors card in the case. 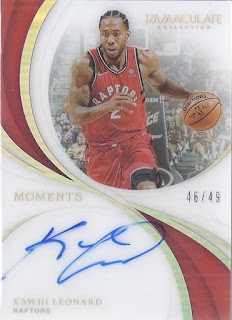 I really didn't think I'd land a Kawhi autograph from his time in Toronto. I thought the closest I would come was asking and getting one as a replacement if my previously entered Kobe redemption didn't come through. I'm not upset at all that he still isn't a Raptor - there's a championship banner now hanging in Toronto. It was all worth it. With sticker autographs with Kawhi pictured on the Raptors going for about $200, luck was really on my side to land this, and the Siakam for a fraction of the cost.

There you have it! Up next, some Prospecting (with Heroes)!
Posted by buckstorecards at 06:25