As one season draws to a close, it is time for another to begin. As the NHL kicks off today, it is time to clear the Sens content out of my 'to be posted' box, and I'll do so, knocking off some Sens  from both the COMC portion of the collection and a recent group break. 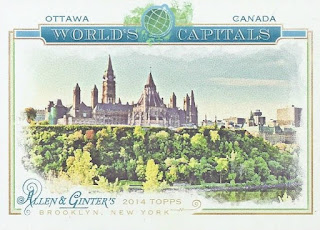 This might not count as a hockey card to some, but it does to me. If nothing else, it does act as a perfect front-of-the-binder card for the collection. 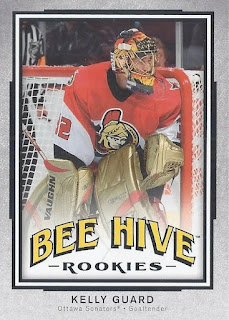 Now, for some actual hockey. Kelly Guard may not have been one of the more memorable goaltenders in team history, but he does have one of the most appropriate back-of-the-jersey names. 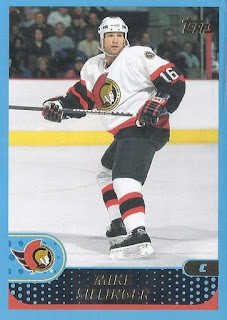 Mike Sillinger only spent 13 games with the Sens, but that was still enough to merit a Topps base card back in 2001. 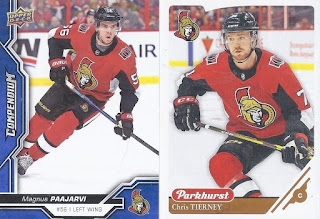 My quest for at least one card of anybody who got one from a major release was helped by the e-packs. While Chris Tierney has received cards in some of the early releases, the Compendium issue looks to be the only cardboard evidence of Magnus' season in Ottawa.

Off to group-break land, and the goodies from a case-break of the new Artifacts release. With 100 cards in the basic base set, the Sens ended up with the standard 3. 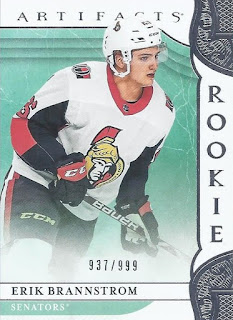 The rookie portion of the set is robust for Ottawa, also with 3 numbered cards. Erik came to the Sens as part of the Mark Stone trade, and has made the team out of training camp. And the recent history of Swedish defenders in Ottawa have worked out well. 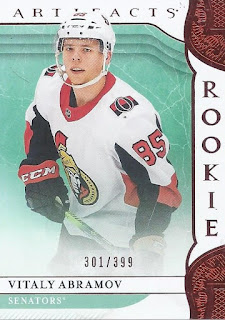 As usual, the set has parallels. Here's a ruby parallel of Vitaly Abramov, who will start the season in Belleville. He arrived in Ottawa as part of the Matt Duchene trade. 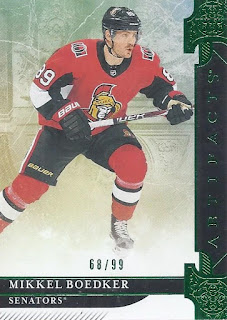 And here's an Emerald parallel. 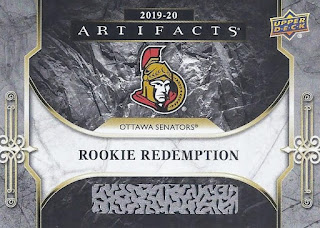 And this will turn into a Sens card at some point. As of now, the only player on the roster without a card at the NHL level is Scott Sabourin. It looks this will be the card of a 4th line enforcer, at least initially. 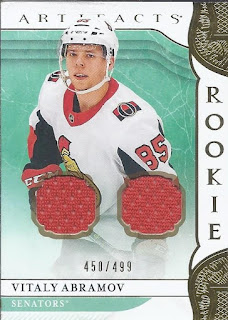 Arifacts means there are a lot of relic cards in the release, and let's start going through those. The rookie swatches are the highest numbered of the bunch. I'm actually surprised that the newcomers' jerseys are in the colours are their current team. 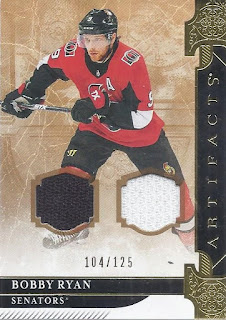 No surprise, though, that Bobby Ryan's swatches are team colours. 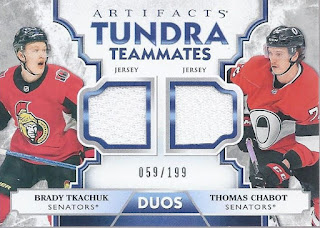 One Sens player swatch deserves another. 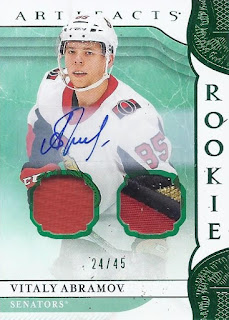 While autographs aren't the big draw in Artifacts, they remain available. And I landed one. And it had the requisite swatches to go alongside it. I always enjoy getting some of the gold/bronze portion of the Sens helmet on my swatches, and this is another example of one.

And there you have it!
Posted by buckstorecards at 05:27