A blaster did a pretty good job of damaging my wantlist for the 17-18 OPC set. How about trying a trio of fat packs, for a little cheaper price? The bad news is that there will be fewer inserts and parallels, but there will be far more base cards. 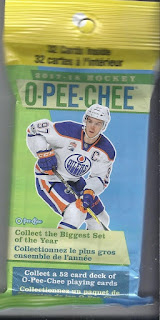 How will I do with 96 cards? Pretty well. I ended up with about 40 new cards for the set. 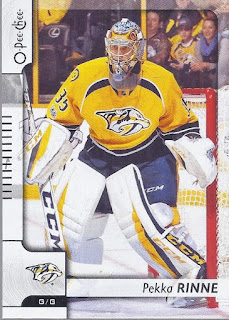 No major names off my wantlist, so if I had to pick the biggest name from the regular set to cross off, Pekka Rinne easily wins it. 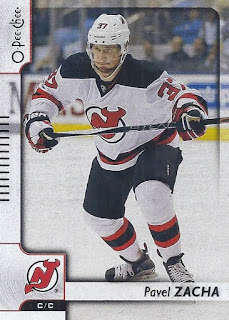 The image just looks dirty in comparison with the other brighter images in the set. Then I looked at the scan at COMC and it also seemed to have that dark quality to them over there. Just an odd choice for the image. 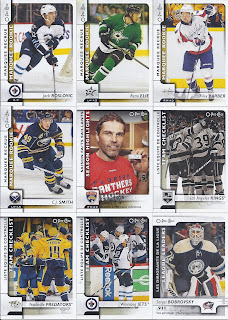 The good thing about these packs is that the SPs aren't really that SPd in the packs at 3 per pack. Even better, all 9 of these were needs for the set. I love that Jagr, and the Bobrovsky actually finishes up the League Leaders portion of the base set. All 9 of them! I'm still need more than half the Marquee Rookies, though. Hopefully, the Expo will do some major damage there. 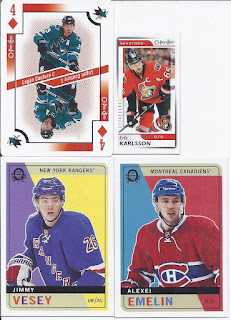 Inserts and parallels were the real SPs of these, as I only landed 4 between all 3 packs. And two of them (Vesey and Karlsson) were dupes. The Karlsson is actually from the SP portion of the minis and fall at a rate of 1:34 fat packs. At least it was a rare dupe.

And there you have it! I'm about 135 cards out at this point, meaning I should reach my goal of 80 percent completion that I wanted before I put up my wantlist.
Posted by buckstorecards at 10:26