Stepping off the repack kick I've been on lately, and into the hobby shop with packs of some recent hockey releases. 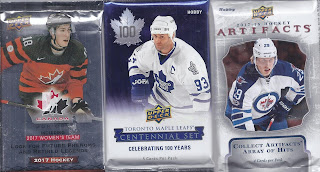 Yes. This means I bought a Maple Leafs pack. I'm not proud, just a completist.

Artifacts was the first one of these released, so I will lead with that. Here's the base cards in the set. Pretty standard look for the set, with the foil returning to the top and bottom of the card after last year's left and bottom design. 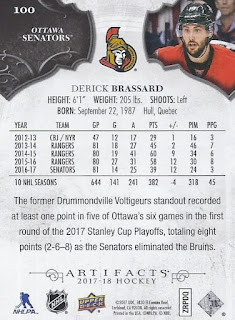 Here are the backs. A little different than the usual with the re-used image on the side instead of the middle. 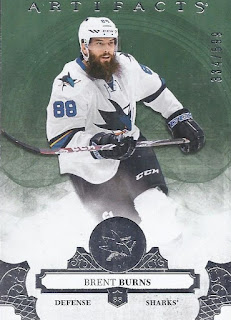 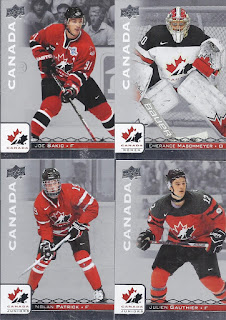 Team Canada Juniors is the suitably patriotic set, in all its red, white and black (black?) glory. I'm not sure why it is called Juniors when the Sakic is obviously from post-WHL. And hey, my first Nolan Patrick card! 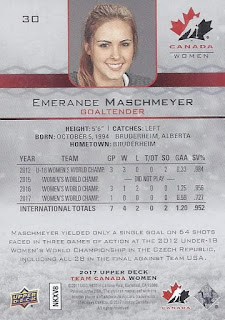 The card back. Interestingly, the guys' cards get the re-used photo, but not Emerance. I wonder why that is... 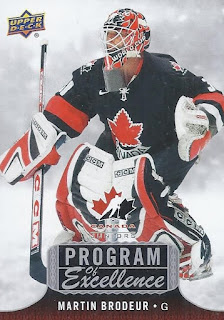 And the one-per-pack insert/parallel is another photo of a player taken during his NHL playing career. 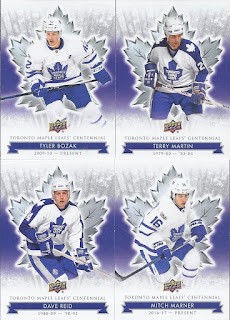 And the dreaded Leafs pack. No complaint about the design. If you're going to zap the background, using the team logo and colours is a pretty good choice for the replacement. The standard base set is 100 cards, so I admit I'm surprised to see cards of guys like Reid over guys from the Original 6 era. I don't think guys like Bill Berg, Allan Bester or Kyle Wellwood would make too many Top 100 Leafs lists. 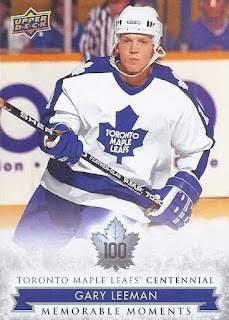 And that's it. 3 packs. No hits, but enough in terms of nice cards. The Team Canada is the only one I'd consider getting a box of, though.

Posted by buckstorecards at 12:42