And here come another 50 cards! 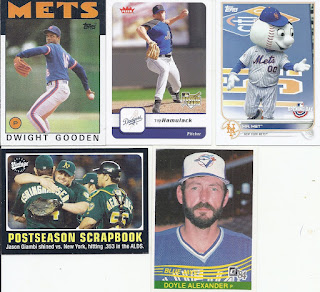 It really doesn't matter which team it is for, any card with a mascot on it is automatically a wonderful card. I don't think I have any Tim Hamulack content in my Mets collections, so despite it being a traded card, I'm going to count it in the Mets binder. And since he doesn't seem to have any cards where he's  listed as a Met, there it will stay. As always, my binders, my rules. 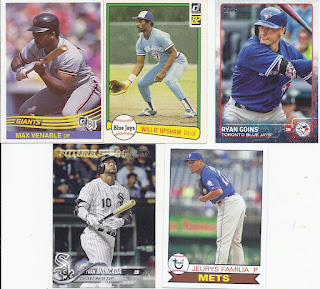 While we have Mets content and Jays content in this little group, I have to give the nod here to Max Venable preparing for a bunt, and looking rather intense while doing so. 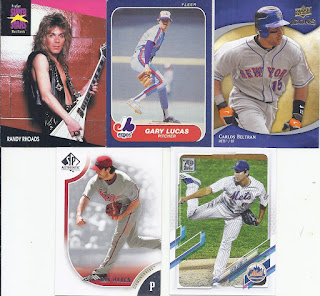 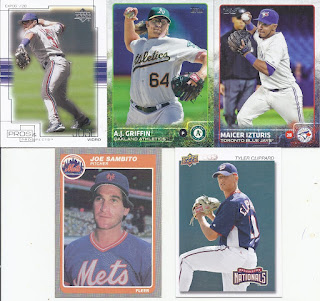 Sure, there's a 2/14 here with the Clippard, but since that is a dupe, I'll like that Sambito Mets card as my favourite in this fivesome instead. It is a traded card after all. He'd go back-to-back in Traded sets, showing up on the Red Sox next year. A rather unfortunate switch for Joe's jewelry case. 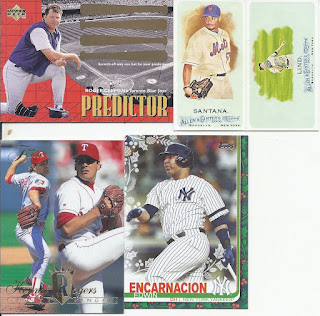 Do I dare to scratch off those predictors on the Clemens? 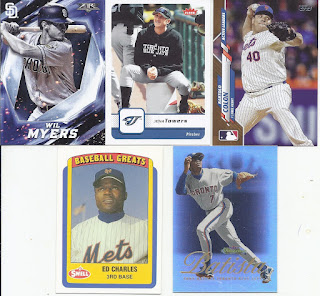 I really like the variety here. We've got the first numbered card of the break, with a golden Bartolo Colon /2020, and it joins the Mets binder along with a Swell Ed Charles entry. Now there is someone who is actually listed as a Met that I know I don't have too many cards of. We get some casual Friday attire from Josh Towers, and while that Tony Batista is nice and foily, any card that doesn't feature his unique batting stance seems wrong. Wil Myers provides 80s Diamond Kings-esque garishness. 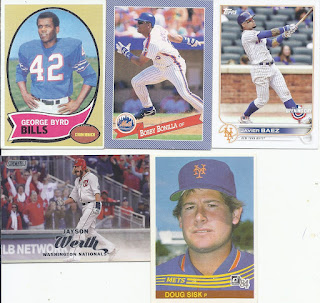 There's another completely random Bills card! Vintage, too! YES! I find it somewhat odd that I'm going to have more Javier Baez cards in my Mets collection based on his brief stint with the team than some guys from the 80s and 90s who spent years with the team. When I'd get these huge 250 card repacks online, there would usually end up being a hit or two in the bunch. I like how that continued here with this completely random Luis Castillo appearance. Corey Koskie also adds some Canadian content to the mix to hit another one of my PCs. 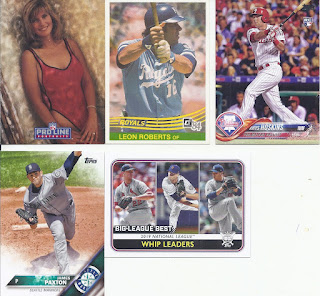 I always enjoy the randomness of finder a card of a special teams player when doing a football break. The thrill isn't as  much when it is the punter's wife getting a card. That's the wife of Rohn Stark. James Paxton makes it go back-to-back with a Canadian MLBer in the scan. 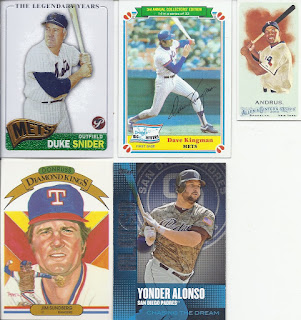 There's the finale for this post. And it is another one with fun variety. Diamond King! Mini! Food issue! Alternate uniform! And Duke Snider! That's exactly what I want from a repack!
There you have it!
Posted by buckstorecards at 06:13