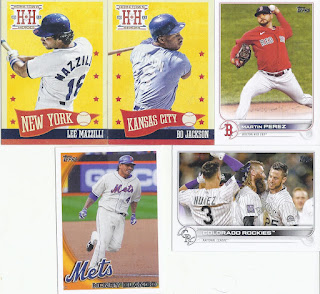 The previous one ended with some Hometown Heroes - here's a couple more to start off the second part. 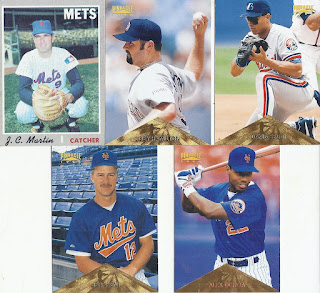 Vintage Mets content! WOO-HOO! That 4-card streak of Pinnacle cards, so soon after the Hometown Heroes  run, concludes what is probably the two longest streaks from the same set in this. Joey would go on to have a few not-so-memorable seasons with Toronto, so I can tie all of these players to my team collections in some way. 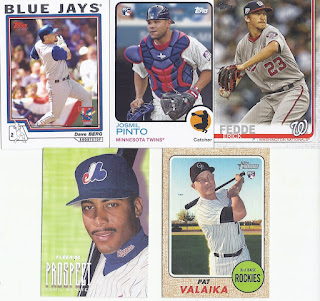 I  was actually wondering for a second why Josmil Pinto would have an entry in this year's Heritage set, before realizing that this card was actually from an Archives release. Oops. We should all strive to look as suave as Yamil Benitez does on his card. 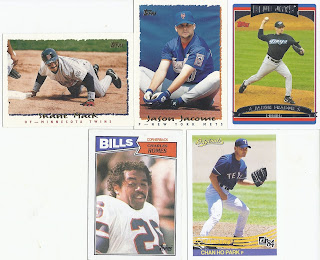 After taking a  break the previous season, it was nice to see Topps return to the tradition from the earlier years of having Shane Mack crawling along the basepaths on his card. And there's a completely random Bills card! Originals was a nice Archives-ish concept from Donruss. I'd say it was a shame that it didn't last, but considering how older designs make appearances in Panini products across their releases, I'd say it did last. 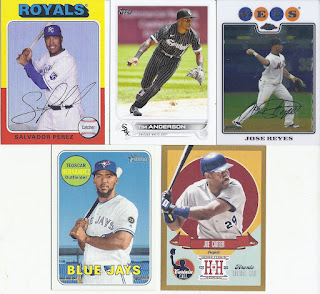 At least I recognized that Perez as an Archives entry right away, unlike with Pinto. Tim Anderson's alternate uniform is, I think, the last base card from Series 1 that I found in this. Joe Carter's gold parallel out of Hometown Heroes also becomes what I think was the last appearance of that great set in this repack as well. 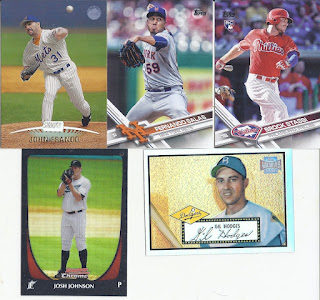 Shininess! While the Hodges is a very obvious refractor, the Josh Johnson next to it is as well. Brock Stassi sounds like a really great baseball name. 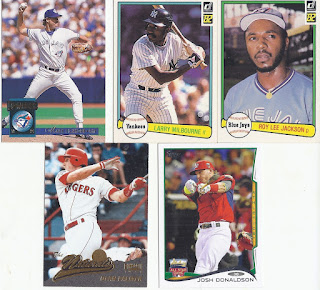 While I'm reasonably certain that Larry Milbourne card is a 2/14 collection dupe, 1982 Donruss is still a fun design and I'll probably still be keeping it in my miscellaneous collection. Roy Lee Jackson is looking around for a microphone to sing the anthem. 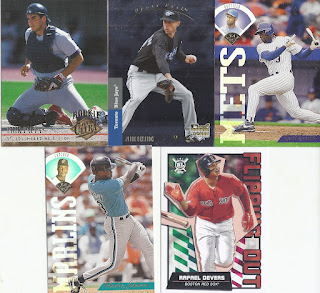 How can you have a 'bat flip' insert set and not have a Jose Bautista card in it? Shameful checklist construction. 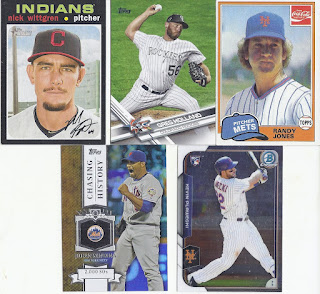 How do you make a Mets card with a great design even better? Make it a food issue card! 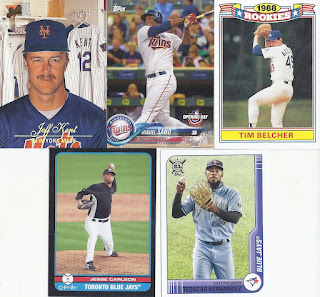 And that's another 50 cards worth. 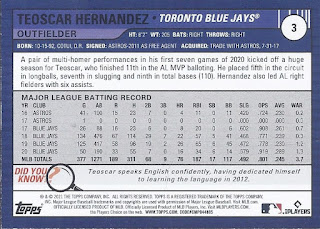 But darned if I am going to end with a Big League base card and miss out on the chance to show off a 'Did You Know'.
There you have it!
Posted by buckstorecards at 11:23