Packs from the Dollar Store 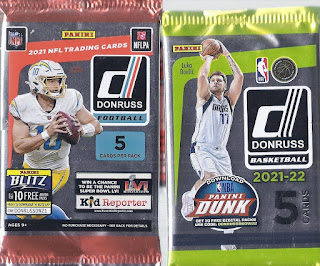 I happened to be at a mall with a Dollar Tree as opposed to a Dollarama. They didn't have repacks there, but they did have packs. I could choose between these, and some Hoops and UD Series 1. With the latter being boring this year, and the Hoops pretty much assembled, I chose one each of the remainder. They do promise a yellow parallel in each though.

This might be the first Donruss football I've busted from this season. At least with a Rater Rookie, and an Eagle for another mailer to Cards on Cards, it wasn't too bad. 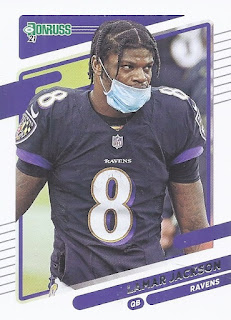 I wasn't expecting any sort of parallel in these, but I did get this 'helmet off' photo variation. While this doesn't scream 'Baltimore' as much as Josh Allen's screams 'Buffalo' it is something a little different, and the mask is pure 2020 photography. 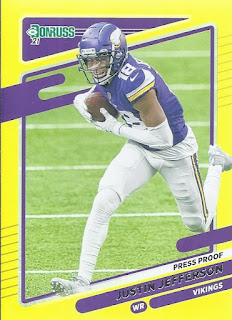 That's actually a pretty good player to land the parallel of. 2 years, 2*All-Pro, 2*Pro Bowler, and already over the 3000 yards receiving mark. An appropriate way to wrap up what was both a Vikings and a purple team colours hot pack. 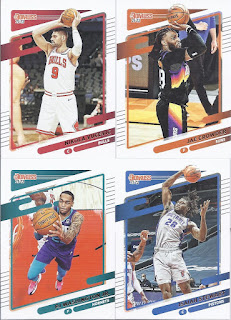 I've busted a jumbo pack of 2021 basketball, so this wasn't as new to me as the football. Nothing too interesting in this bunch, but at least there was an alternate jersey in the grouping. 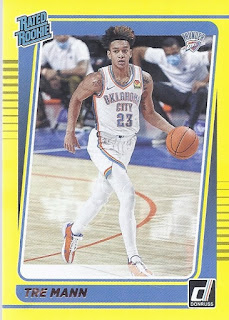 I didn't think that these cheap-o packs would extend their parallels through the rookie portion of the set, but I guess I was wrong. While this isn't the Thunder draft pick that was the chase card for the team, it is still a first round pick. And combining this with the Jefferson, it looks like things worked out pretty well for these two packs, at least when it came to the one-per parallels.
There you have it!
Posted by buckstorecards at 07:25