Today, an assortment of cards I landed either through an e-pack, through trading on e-pack, or just because they were cheap on COMC. Variety! (Even though there's only hockey cards in the post) 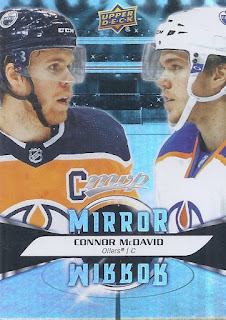 First up, a card with an interesting story behind the design. It was come up with by a 9-year old. While the regular versions of the card logically use the same image, there are SP variants that use two different ones. Which kinda defeats the concept of "Mirror". 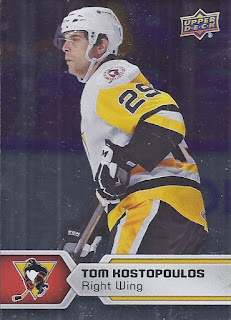 For things you really don't see much of, here's a minor-league card from 2017 of a player born in the 70s. Tom was in the NHL for much of the 2000s decade, but wrapped up his career with 5 seasons with the Penguins AHL affiliate. 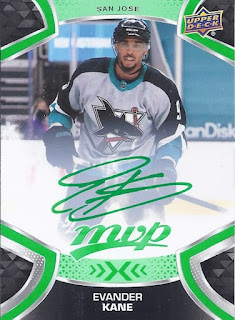 Uniforms of the damned! 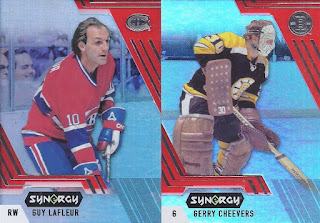 Here's a couple legend cards out of Synergy. Just because. 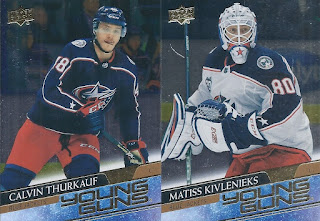 The e-packs I got of last year's Series 2 really seemed to be destined for a Blue Jackets fan instead of a Senators fan, as they all seemed to contain one of these two Young Guns card. It just seemed logical to combine the two of them to get the silver foil parallel, including one of the ill-fated Kivlenieks. 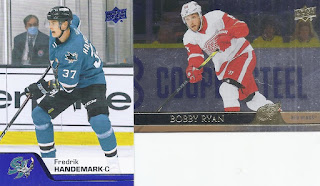 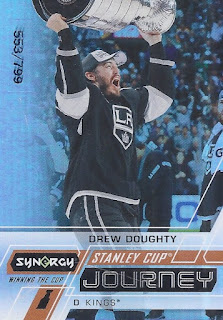 As always, any card featuring an appearance of Stanley is always a good card. 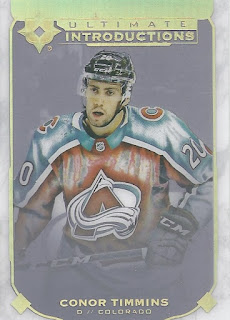 Now this is definitely a choice when it comes to using filters on  a card. These were so wonderfully cheesy, I had to get one of them for my misc. collection. Conor Timmins was, at the time, the cheapest one available. 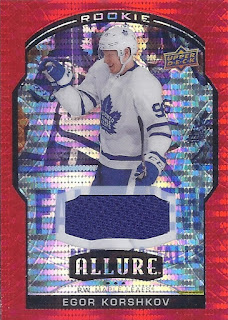 How do you get me to pay for a  Leafs relic card? Put an interesting photo on the card. Egor played in one NHL game, but he did manage to get a goal in that one. And a photo of that post-goal celebration ended up as the image on his Allure card. While I would have been content with that just as an interesting photo, some gaudiness and a swatch of a jersey that certainly wasn't worn in-game and you've got a rare Leafs card that this Senators fan wants.
There you have it!
Posted by buckstorecards at 08:28