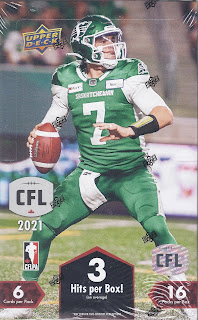 It certainly took a long time for this to finally drop. Nothing beats busting a 2021 product with the 2022 season well underway. But, it is Upper Deck. I'm expecting them to release 20-21 The Cup during the 22-23 NHL season at this rate.
But, will it be worth the wait? The card front? Pretty much a carbon copy of hockey's design, only there's no foil on the front. That's actually better for legibility than with 20-21 flagship NHL. And team colours > generic foil. 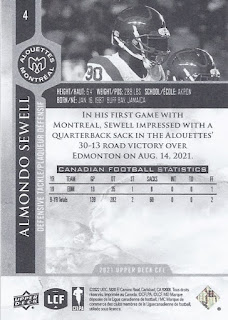 They've ditches all the colour on the backs, going black and white for the base cards. Parallels just change the text and graphics to match the colour of the parallel. That's all. I do like how the LCF is used for the Montreal players, with all the other teams using the anglophone CFL. 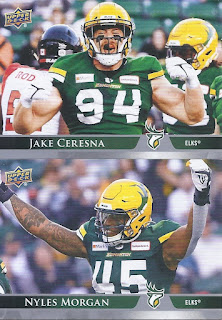 At least with the late release, we don't end up with any photos from the previous season in these. At least we don't when it comes to getting Edmonton Elks cards in the set as opposed to any Eskimo uniforms. 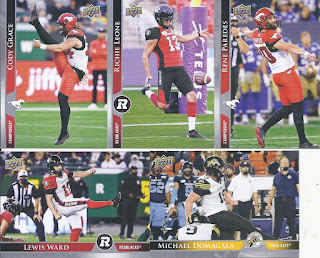 With a 200 card base set for a 9-team league, you do get to see cards for positions that don't show up in other releases. Such as kickers/punters. 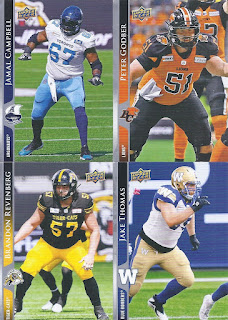 Offensive line guys also show up, although it does seem their numbers are a fewer in this release compared to previous ones. 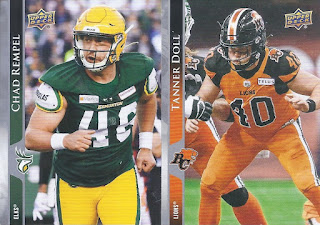 Best of all, there are cards for long snappers in the release. The 2020 release saw 1 player (Jorgen Hus) appear, but this year you get a pair of them. 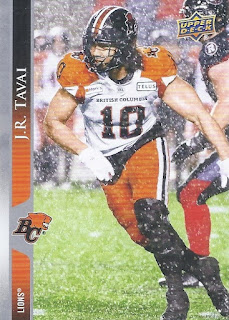 But if I had to pick a favourite card in this that wasn't a Hamilton player, it would have to go to the only weather card in the set that I saw. (I ended up 7 short of the 1-200 set, probably the most successful 3 box break for set-building I have had). 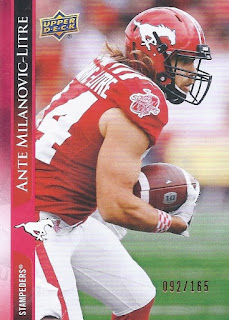 Each pack would contain either a hit or a parallel. Reds are the most common, and, as with any release, the ones where the parallel manages to go with the team colours looks really sharp. 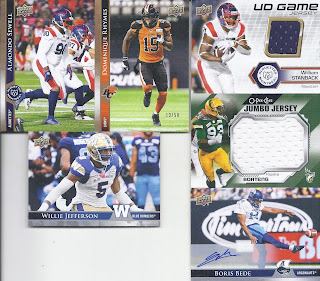 For the rest of the recap, I'm going to group every other hit or <50 parallel by box. Here's the first box. Blank backs make yet another unannounced return, and I'll just assume that the print run for these is in the 10-ish range, which is what that Willie Jefferson is. Those jumbo jerseys are supposed to fall every 10 boxes, but I've read of people busting a case of this and not getting one. I'm probably one of a handful of people that would like to get a kicker-graph, so I'm elated to pull one. Especially when it comes with a nice photo. 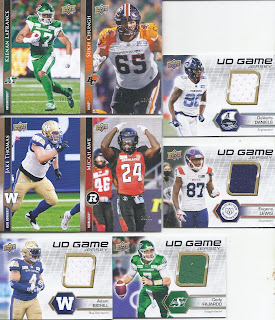 I got more than the expected 3 hits, but not an autograph to be seen among them. Still,  if it isn't a Tiger-Cats swatch, a green Riders relic is the second-best get for me, for the same reason a green Boston Celtics is a nice get - you just associate the colour with the team. A double-blue Argos swatch or a red & black...Redblacks swatch would also count. And for those thinking Micah Awe would be a good East-West bowl name, his last name is two syllables. Sorry. 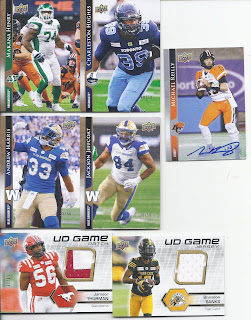 A little more normal of a box here in terms of make-up. That's a very solid autograph to get, even with Reilly having since retired. He's a former Most Outstanding Player and a Grey Cup MVP, and still lead the league in passing yards during his final season. It is nice to get that numbered patch card, but its thickness probably caused me to miss out on a couple base cards that would have put me slightly closer to the complete base set. And it did take until the final packs, but I did finally get a Tiger-Cats hit out of the break.
There you have it!
Posted by buckstorecards at 07:45