And the finale of this group. 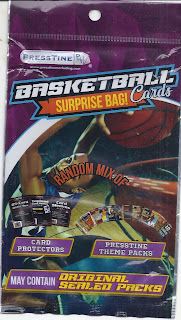 And these are the contents: 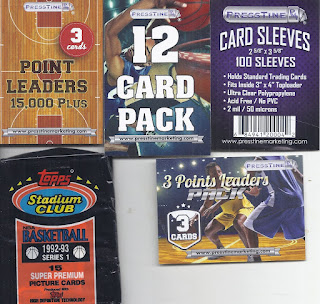 I'm never going to run out of sleeves.

In these repacks, the 15000+ Career Points pack usually means you're getting some early 90s stuff, and that held true again. 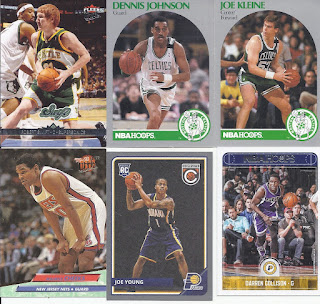 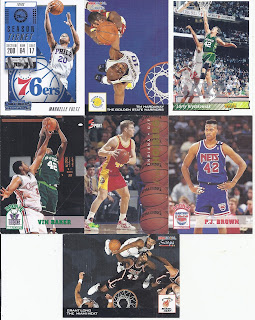 Bonus card! Kleine & Johnson were also right beside themselves numerically in the set, so I'm guessing they got stuck together when the repack machinery was working. That Vin Baker rookie was probably a good pull at one point, before becoming repack fodder. Hoops really liked using overhead photos in that insert set. 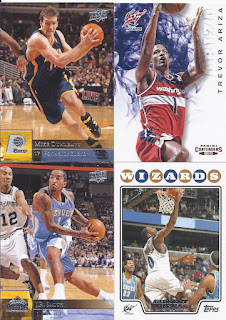 I don't really want to go through the stats to find out if these players really were 3-point leaders at one point, but unlike the the 15000+ pack, at least they aren't all junk wax cards. Even though it deviates from the ticket motif, the smoky background in team colours is really nice. 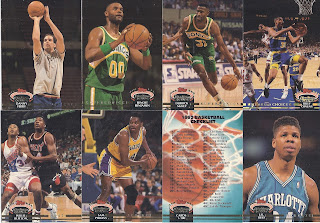 And the Stadium Club pack. Topps was determined to continue the design from the other sports, and put the player's rookie card on the back. The only problem was that Topps had been out of  the basketball business for about a decade, meaning that... 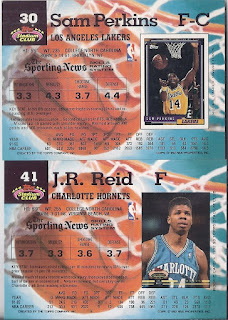 the player's rookie card was, in most cases, the card from the flagship set from earlier in the year, or even a picture of exactly what was on the front of the card. While the latter was fun when it happened in other sports, it looks very amateurish here. 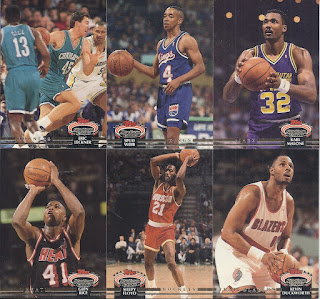 A little more from the pack. Spud Webb is always a nice pull. 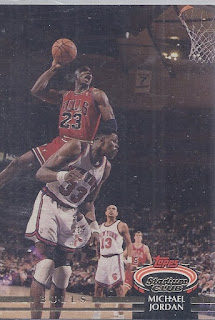 And the final card to show off is an absolute classic. Not only is it a Jordan, but it is a photo that nowadays would be called a posterizing. And the posterize-ee isn't some garbage-time player either. A photo from Madison Square Garden as well! So much greatness on one piece of cardboard. It isn't a super valuable Jordan, but everything about it makes it seem like it deserves to be.
There you have it!
Posted by buckstorecards at 07:55