What's on the other side? 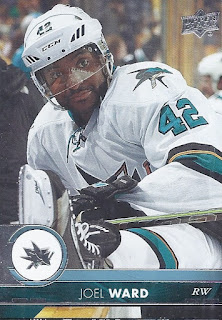 It definitely is an interesting choice as a non-game photo to start things off. Exactly what you'd expect from a UD base card. 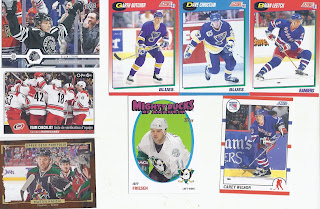 That's a lot more horizontal cards than expected. That Hurricanes checklist card was a short-print in that release. Two alternate uniforms in that run of three as well. There's also a throwback design with a Heritage that went to back 30 years to 1971. I always like the "That's what the design would look like for a team that didn't exist at the time" feature of those. 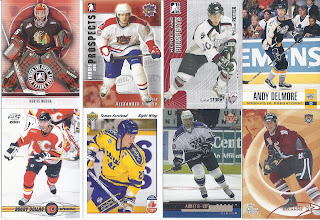 Again, a streak of Heroes and Prospects is so much more interesting than a Bowman streak.  Delmore played almost 300 games in the league, but I had no memory of his career. Forslund was enough of a junk wax era guy that I remembered him, despite about 250 fewer games . 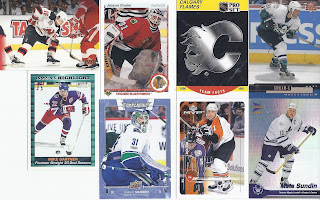 And the final group. All over the place with this. I wasn't expecting to see the e-pack exclusive Compendium in this, but I'm certain I've seen them in these repacks before. I'm just far too lazy to look for the post(s). And that final Sundin is a food issue card from McDonald's. I can taste the fries in 2002 already!
There you have it!
Posted by buckstorecards at 05:00