I've still got a few of these left in the ol' repack box. Let's finish them up over the next few days! 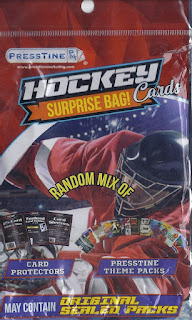 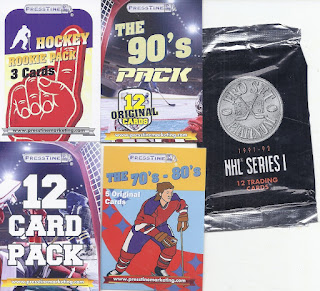 Both Hodson and Marshall had their names appear a pair of times on the Stanley Cup, so there's somid solid careers in the mix. As  for Jordan Weal, he was in the KHL this past season. 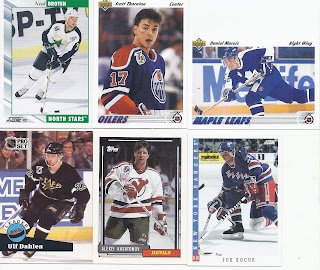 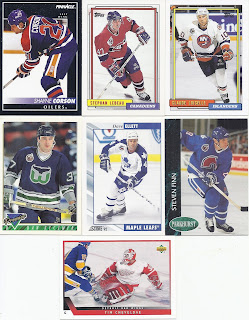 That is a lot of junk wax era stuff in the 90s pack. At least there's an interesting photo on the Cheveldae. The most amazing thing was the complete lack of any 1990 Bowman among these 13 cards. 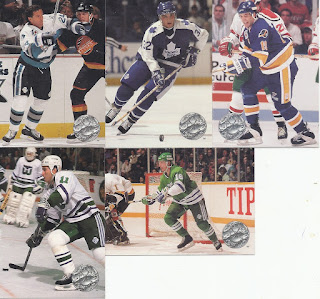 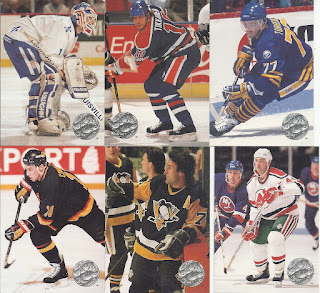 Hey! There was only 11 cards in this! At least there was a Rangers alum among the group, with Paul Coffey rocking some impressive hockey hair. There's some helmetless mojo too with Doug Wilson on one of the early Sharks cards.  At least this ended up more interesting than the variety pack of early 90s stuff, despite fewer cards. 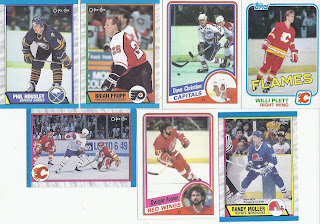 Another group with more than the advertised cards. But, as with the Dollarama versions, this one contained no 70s content. Foster is the second Rangers alum in this post. The Flames team card, very appropriately, comes from their recent Stanley Cup final victory. Plus, Willi Plett is the finest NHLer ever to be born in Paraguay! That counts for something! 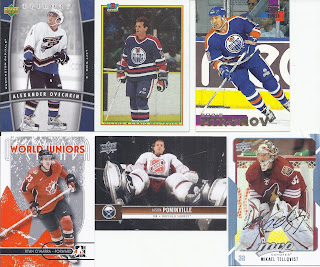 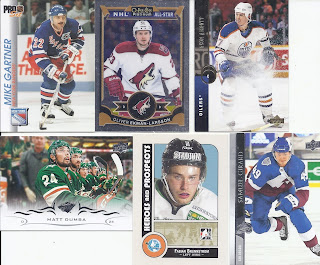 An Ovechkin is always a good way to start any sort of miscellaneous grouping. It took quite a while to get to the repack's best friend - 1990 Bowman, but there it is. With the lock-out and the reduced rookie class as a result, the 12-13 release year isn't the most memorable, but the Pominville is one of the more unique photos out of that year. Dumba's card has another great use of a horizontal medium. While I do like seeing photos of uniforms from outdoor games on cards, those ones sported by Colorado remain hideous.
And there you have it!
Posted by buckstorecards at 06:59