When you have a couple Raptors cards in your COMC to-be-posted and several in your trade box, here's a way to get them all out of the way in a single post. 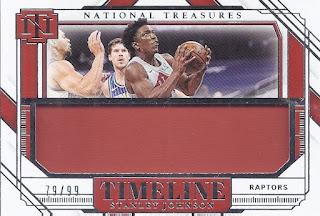 There was but a single Raptors card in my latest mailer from Dennis @ Too Many Verlanders, but it is an important one for the binders. I would like to add one card of every player who got one as a Raptor, and National Treasures' relic cards provided my only Stanley Johnson possibilities. Here's one that where it was better to send out the batsignal than to pay $20 for cross-border-shipping. 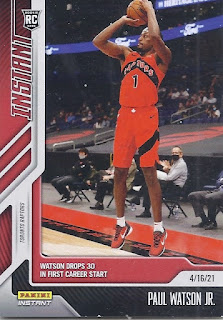 Here's another player with only one appearance on cardboard in a Raptors uniform. This Instant release, commemorating a 30 pt game against Orlando, is also his only NBA card to date. It also provides a look at the temporary digs they had last season in Tampa. Paul has since moved on and is with OKC now, so this will likely be his only Toronto card. 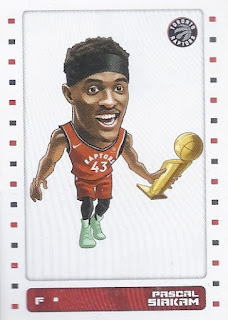 Even in cartoon form, I have to add any championship themed cards. 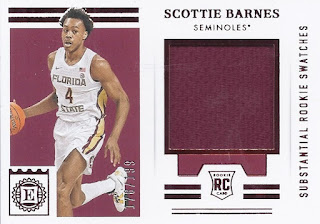 As I close in on the moment where he'll actually have cards as a member of the Raptors, here's my second relic card of Scottie Barnes. 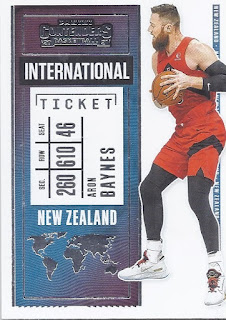 Switching to a recent PWE from Kerry @ Cards on Cards, here's another player who didn't get a lot of cardboard during his one-and-done season in Toronto. While I realize he didn't exactly have piles of photos to choose from for this card, could Panini possibly have come across at least one where his foot covering up his country on this International entry? 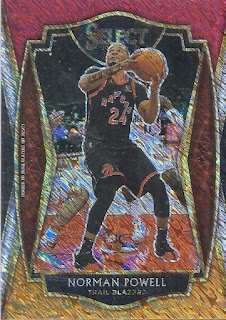 Despite being listed with Portland, I'm certainly counting this Norman Powell card towards the ol' PC. He's still a Raptor in the photo, and that's good enough for me! 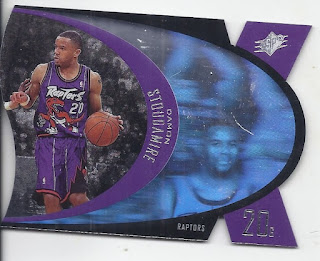 A holographic finale from the PWE!

So, to my trading partners, thanks for these cards, and thanks to my COMC credit for the Siakam, Watson and Barnes!

Posted by buckstorecards at 10:44