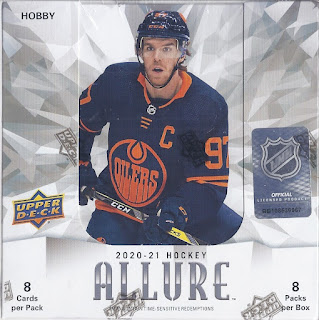 What was in this box of Allure that was a bonus in the break I posted yesterday? Let's find out!

The first 100 cards in the base set are a mix of stars and rookies, while the final 50 are SPd rookies (with some repeating among the base rookies). The latter, with the design shown on the Angello, fall at 1-per-pack, but with the e-packs, finishing that part of the set doesn't feel too intimidating to finish.
It is also not-so-intimidating because even though the release was late, it lacked some of the main rookies that other sets had. No pack-pullable Stützle, Kaprizov, Sorokin or the ilk. They're available in redemption form on e-pack, but not in the base set. 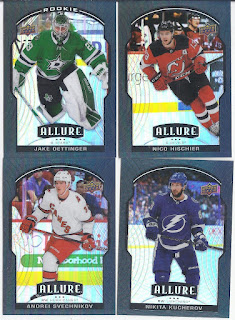 Black Rainbow parallels are the most common parallels in the set, appearing 1:2 packs. 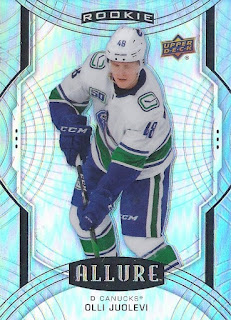 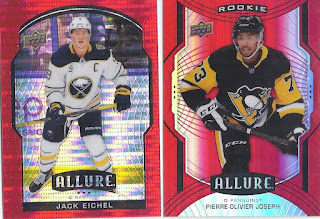 Instead of separate sets, the design changes for the Red Rainbow portion. Here, the 1-100 gets the flashing pattern for the background, while the SPd just end up with a standard, shiny red background. In fact, the design background also changed for the other parallels I landed as well. 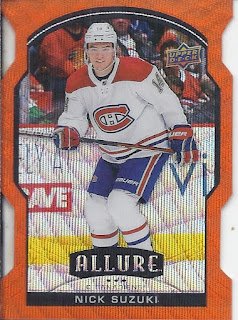 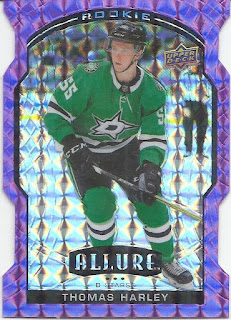 But this was probably the big pull for me in the box - loud, obnoxious and numbered to only 10. 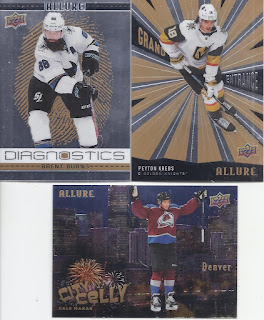 The inserts are pretty generic, with Diagnostics being an excuse for more veteran content, and Grand Entrance adding some more rookie content. But, seeing as I like 1993 Leaf, I do like the City Celly, if for nothing else but the cityscape background. 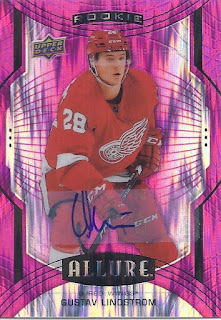 There's one autograph per box, and here's that to wrap up the post. If I can't land a Wolverines alum to send off the Ann Arbor, I might as well land a Wings card instead. This is a /75 Magenta parallel as well, and is set aside for a future stateside mailer.
There you have it!
Posted by buckstorecards at 11:23