While the games started last night, the season doesn't really start until your favourite team plays their first game that counts. For the Senators, that's tonight. So here's some "cheap 'cause of e-packs" Sens stuff. 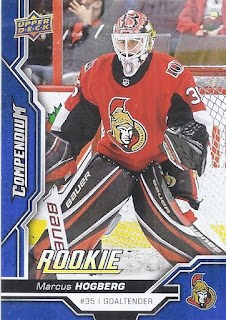 If this were baseball, Hogberg would be a AAAA guy. Probably too good for minors, but not quite good enough to take someone's spot on the big club. As such, he was back-and-forth between the NHL and the AHL for a few seasons. And Compendium provided his only NHL card, but he did get a Topps Now sticker last year. He's since returned to Europe. But at least I have this for my every-Senator-ever collection. 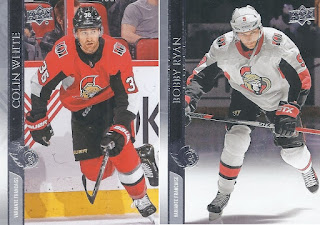 Unlike with the Daccord I posted on the weekend, they didn't lose the French translations for these cards. 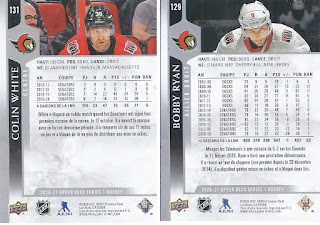 See! Here they are! 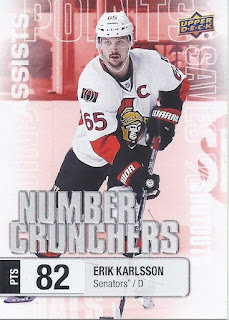 You'd think a set named 'Number Crunchers' would use a more obscure stat than 'Points' for its number. Why not Corsis? 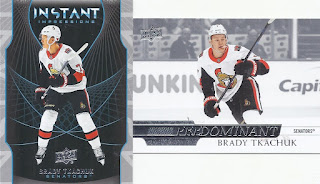 On the day he signed a long-term deal, I better show off some Brady. 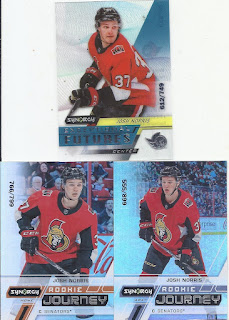 If a 20-21 release doesn't have a lot of Tim Stutzle in it, it will have a lot of Josh Norris in it. Such as these numbered, but still really cheap, entries from Synergy. 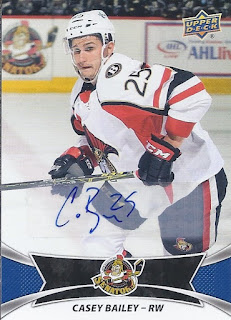 Casey Bailey went to the Senators as part of the Phaneuf trade, and managed 7 games with Ottawa. But he's just perfect for an AHL auto. 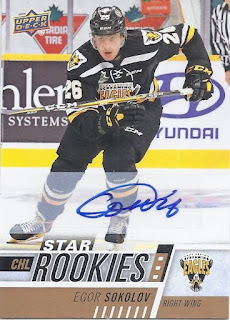 The Senators have put off calling Sokolov to the roster at this point, but he's probably the guy in the minors that fans are most excited about seeing in Ottawa at some point. It is hard to be patient, but I'll trust the process.
And there you have it!