Time to return to the COMC to-be-posted box, and I'm showing the highlights from the 2006 Parkhurst portion of this package. While it did not knock my wantlist down to zero, it was still pretty close. 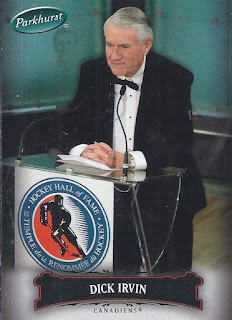 The fun thing about this set is that the entire checklist is of retired players, and other people associated with the game. UD tried to do something similar with Volume 1 of Chronology, but the enjoyment was not really there with a far tinier base card checklist, and a price associated with a higher end release. 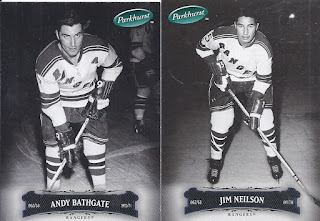 Black and white photographs add to the vintage feel from the set. I love this grouping, especially since the presence of a #5 behind Bathgate on his card makes it very likely that these photos could be from the same shoot. 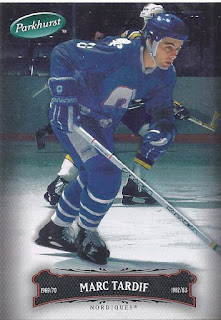 Here's a few more from the slightly-SPd high number portion of the set. 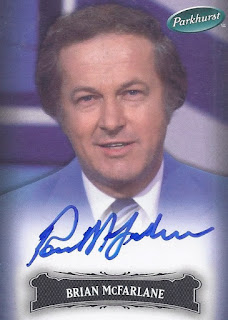 I certainly had some methodology when I laid out the scans for this post. Start with a broadcaster, and end with one also. There aren't too many sets I can do this with. And while this technically isn't a set builder, I couldn't resist an inexpensive, somewhat oddball of an auto.
There you have it!

Posted by buckstorecards at 11:04