The COMC to-be-posted box awaits, and here's a trio of Kitchener Rangers cards this time. 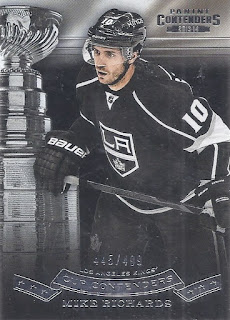 Of the three cards today, this was the only one that didn't fall under the umbrella of "cheap because of epacks" category. Richards definitely counts as a Cup Contender in 2014, as he'd pick up his second Stanley Cup ring this season. It is in good company with his Memorial Cup, Calder Cup and Olympic victories. 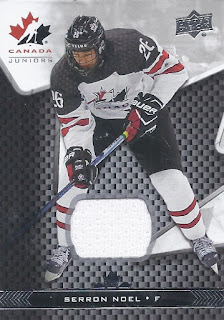 Team Canada Juniors cards being available on e-pack means cards of anyone who isn't a superstar tend to be inexpensive. Noel came to the team halfway through last season, and only played about 20 games for the team before the season shut down. That's still enough to count him towards the collection. He was a second rounder of the Panthers, and finally got back on the ice with their AHL affiliate when the season resumed. 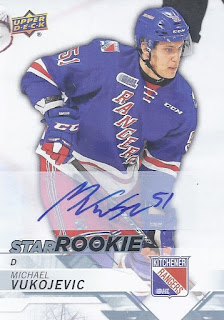 From one player who just made his AHL debut to another, here's a very direct alumni card. Vukojevic was a third rounder of the Devils, and is, like Noel, playing for an AHL team based in New York. Binghamton for him, Syracuse for Noel. Unlike Noel, his entire OHL career was spent in Kitchener.