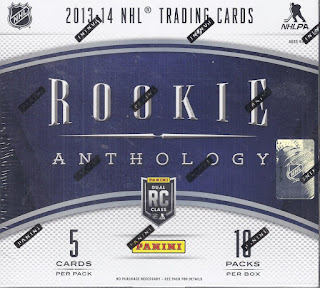 When in doubt, order up and break some 13-14 Rookie Anthology. I probably shouldn't be doing this and concentrate more on the build of the master base set. I'm not going to show off everything, but will hit at least one highlight from each of the 10 packs. 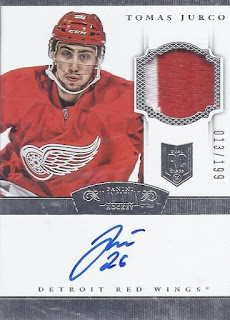 It is a decent enough start with a sweet patch and an on-card autograph. Alas, with all the stuff I've busted, this particular RPA is a dupe. 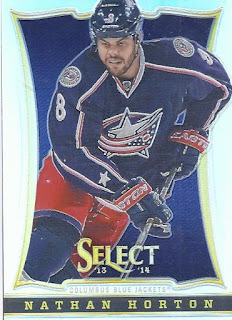 All but this pack contained a pair of inserts/updates/parallels but this was the exception. That Barkov is a pretty nice card to land from the box, with the golds being mostly at the rate of one-per-box. The Broll is also a need for my Prizm update portion of the set, which I swear that I'm not building. I swear. 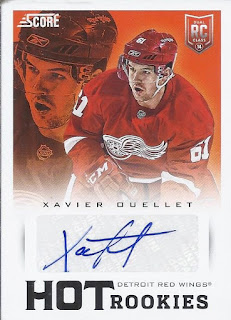 Another Red Wings autograph, another dupe. Both of the autos so far have been guys still in the league, but both have been back and forth between the NHL and the AHL. 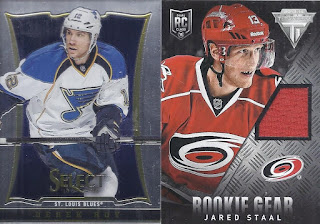 The Derek Roy is a dupe, but I can always add it to my Rangers alum collection. The Staal is a simple one-colour relic, but it is a new card for my Rookie Gear portion of the collection. Again, I swear. I'm not building it. 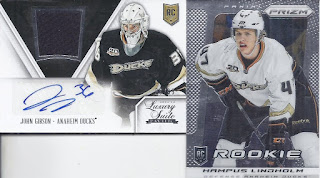 A Ducks hit pack! It is back-to-back cards with a Rangers alum highlighting the pack, with one of several John Gibson auto/relics that I've pulled from this product. With a still-outstanding redemption, this is the 5th one. 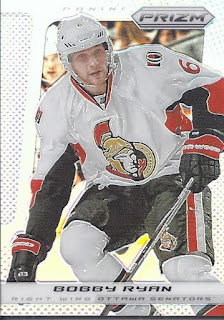 Shininess again! And it is a Sens card! WOO-HOO! 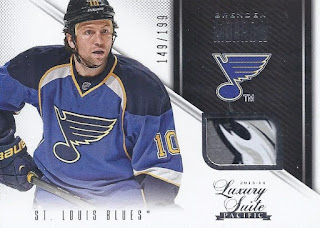 Another dupe hit, but this one is an upgrade. My previous Luxury Suite card of Morrow has a mostly black stick sliver, but this one is much better. While I generally sell my dupes from the boxes on COMC to recover some of the cost of the box, I think I'll keep this one and sell the original. 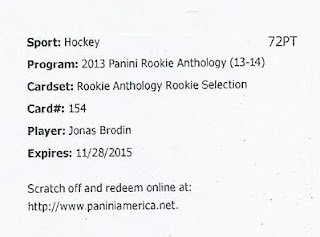 For me, this was the big card in the box. I'm trying to build the complete base set for this, which consists of the standard 1-100 base cards, and the 96 card Rookie Selection for this. And this was one of the cards I needed. Panini briefly stopped accepting expired redemptions, but they're doing so again. Even if a redemption is unfulfilled and never was/will be, I do consider the redemption card as the card. I have no idea if this Brodin was ever fulfilled, so in the meantime, this is just fine.

With the content on the way/in my COMC inventory, I now only need the Tarasenko from this. Which was also a redemption. 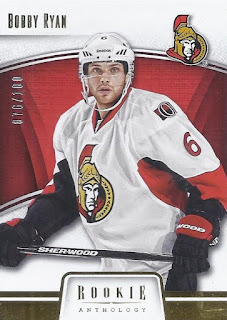 Appropriate that I end up with Bobby Ryan/Sens hot box.

And there you have it! Knocking my wantlist down to 1 easily makes this a really good box, considering there were 90+ other options for the Rookie Selection. Throw in some PC hits with the Ryan and the Gibson, and it is even better. Up next, a PWE!
Posted by buckstorecards at 21:05