Today, it is a 15 card hanger and another Surprise bag from the Dollarama. 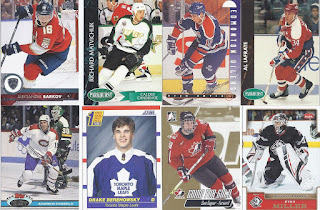 Starting with the hanger, there were actually 16 cards in the pack, making a nice even way to show off the cards. Also, both cards visible featured the Panthers. There some nice stuff here with an early Ryan Smyth appearance, and a nice patriotic card of Smyth's future Edmonton teammate with Gagner. 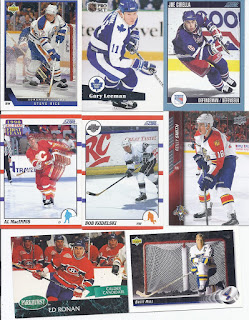 2 Rangers alums top-to-bottom with Rice and MacInnis, and that Brett Hull was a pretty junk wax famous card, so that's definitely $1 well-spent. 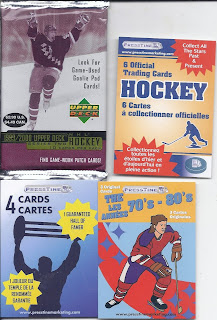 And your Surprise Bag contents. All cardboard this time! 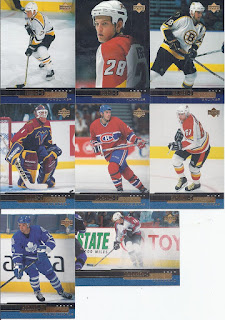 Only one real notable photo here is the Adam Deadmarsh on the bottom. There's a trio of players making their first appearance in NHL uniforms on UD cards, Ference, Regehr and Saprykin, but Saprykin is the only rookie there with the others having Team Canada cards. 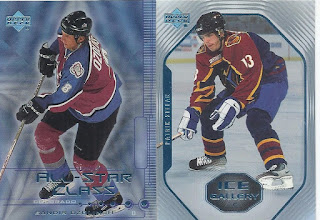 Not one, but two inserts in the pack. 1:23 for the All-Star card and 1:72 for the Ice Gallery. That's pretty good for a repacked pack. 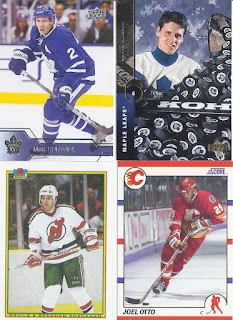 While the promised HOFer in the pack is the Shanahan, the Potvin card with the pucks is a certain keeper, even for a Leafs card. The image also reminds me of the famous photo of Grant Fuhr and the pile of pucks.

70s and 80s was all 80s, with Acton looking like everybody's 1989 Industrial Arts teacher. 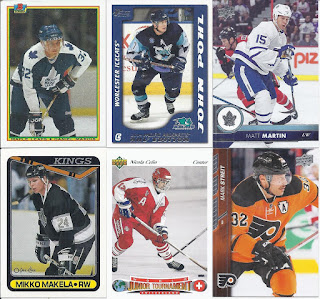 And an AHL card in the misc. pack. Fine by me to wrap this up.

A couple tough insert pulls and the Potvin give the nod to the Surprise Bag overall, but both were solid.
Posted by buckstorecards at 20:48