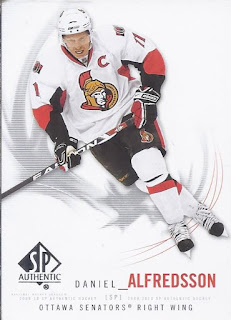 With the Expo postponed, I decided to still do a card-related splurge with the funding I had set aside for the show. The LCS/breakers were hosting their milestone 11000th break, and I decided to take a show. This was a draft format, but unfortunately the randomizer was none too kind to me and I ended up with the 26th pick.

Fortunately, my beloved Senators were still on the board at the time. While I wouldn't get the chance at a mega-super-rare legend, at least I'll be able to add some really nice cards to the ol' team collection. 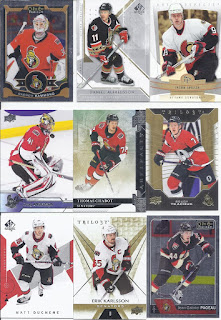 Here's a sampling of the base cards I got for the Sens. There's definitely a good variety here. 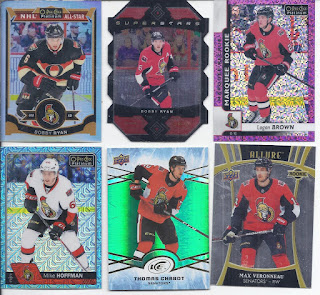 As well as teaser of the inserts and parallels. The Allure card is from the SP portion of the set. 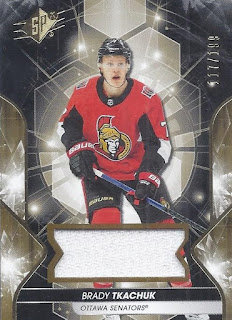 As for the actual hits, I'm just going through them in the order they uploaded. First up is this swatch from the guy who is probably the face of the team at this point. 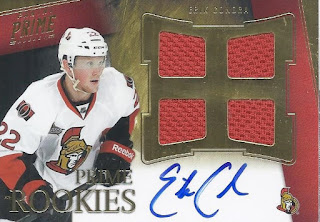 Here's a step up from a higher-end release, with an on-card autograph to go with some relics. Condra stuck around for 5 seasons in Ottawa, not bad for a 7th round pick. He's still on this side of the Atlantic as well, playing last/this season in the Avs system. 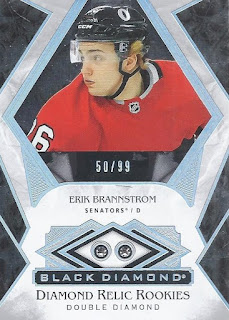 Here's the first big pull, a Black Diamond card containing a pair of diamonds. Brannstrom was a first rounder for the Golden Knights, and came to the Sens as part of the Mark Stone trade. He was one of the more-hyped rookies going into this season, which he spent going between Ottawa and Belleville. It brings something quite different to the team binders. 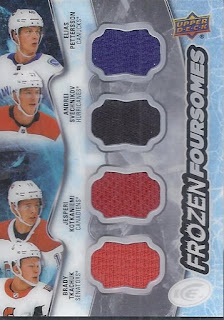 There's a pretty nice grouping of rookies from last season. While the randomizer wasn't nice to me in the draft, I did land this 4 way relic. 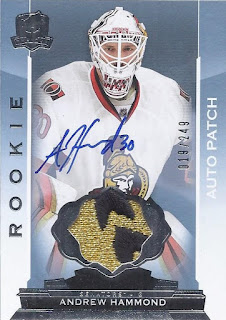 Big card #2. The RPA out of the Cup is the primary chase one for the year. This would have been massive coming out of Hammond's incredible rookie run carrying the Sens to the playoffs. While things have cooled off along with his career, the memories of that run make this a certain keeper card. And bronze on a Senators patch is always great colour to see. 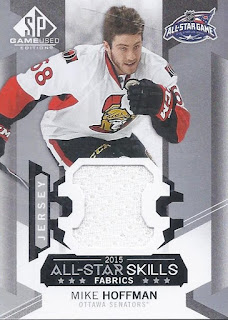 Given the circumstances of Hoffman's departure from Ottawa, his relics really aren't desired by me anymore. 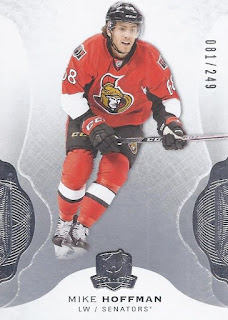 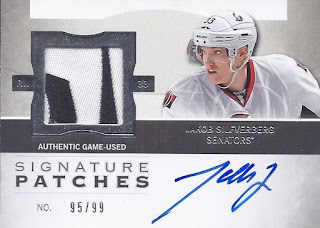 There's an improvement. The 12-13 rookie class was pretty bare, but the Senators were one team that seemed to do well with their cardboard class that season, with Jakob and Mark Stone. Jakob went west to the Ducks in the Bobby Ryan trade. Another on-card auto, and it looks like that patch comes from the face on the logo, which makes it probably the first of that type of swatch I have. 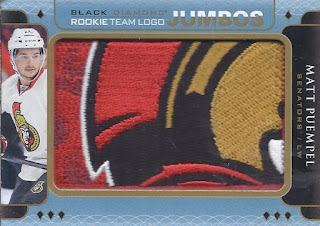 A pretty boring manu-patch. If Puempel had stuck around in Ottawa, I probably would be more interested in this card, perhaps trying to finish the rest of the puzzle. 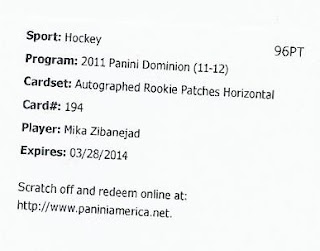 I was bummed by this at first, as the break took place in the period when Panini wasn't accepting expired redemptions. But now they are again, so maybe I'll be showing off something similar to this in the future. 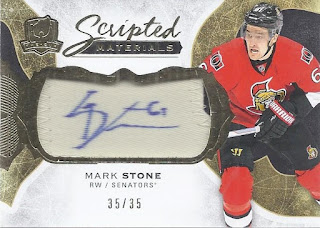 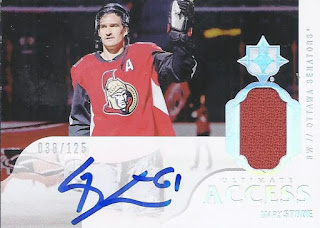 And this ends with a pair of Mark Stone auto/relics. It is kinda a toss-up as to which one of these I like more. The Scripted Materials does offer a pretty unique item with the auto being on the patch itself. And it is an ebay 1/1 as well! But the photo on the Ultimate card is so much nicer. I lean towards the second one based on photo quality, and that it matches nicely with the Brady Tkachuk RPA I got in a prevous break.

And that's it. While I didn't get my money back, I definitely got some great additions to the PC.
Posted by buckstorecards at 20:19