One Card Only: Decisions, Decisions 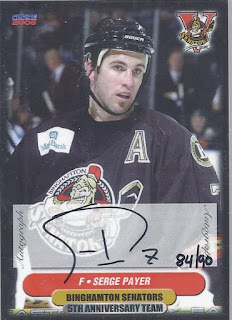 Here's a card with an interesting looking (if not necessarily detailed) autograph that would fit nicely into my Senators collection, even if it is a minor league card from their time in Binghamton.

But he also spent his entire OHL career as a member of the Kitchener Rangers in the late 90s. His NHL career consisted of 10 games over two separate stints with Ottawa, as well as 114 with the Panthers, also over two stints.

So, because my Sens binder is filling nicely, I'm probably going with the latter as its permanent home, since I think of him first from his junior days as opposed to his NHL days.

Again, my binders. My rules.
Posted by buckstorecards at 14:46