It was worth the wait for Canada Post to wait until the New Year to drop off my latest group break goodies. It had some Bills and Raptors in it, but I'll wait until Sunday to make an appropriate post for Buffalo. But the Raptors can be shown off now. 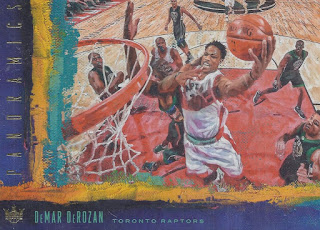 While hits are nice, my favourite part of Court Kings releases are the box toppers. There are versions with ink, but I'm just as happy with a great action shot done with Panini's (Gridiron/Diamond/Court) Kings filter. This is my 3rd Raptors box topper, joining a Stoudamire and a Caboclo. I love the photo shows him against the same Bucks team he dropped a team-record 52 points on for New Year's Day. 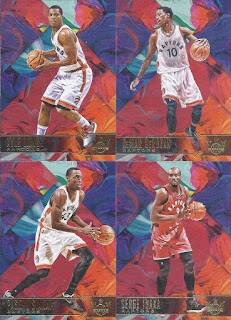 The Raptors earned 4 cards in the regular 100 card base set, and I landed all of them from the case. Given the background, I probably would have avoided the red uniform on the Ibaka. 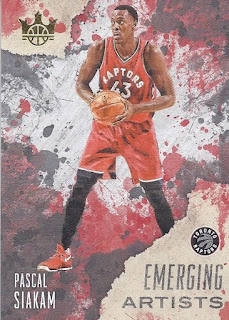 Pascal Siakam got not only a base card in the set, but also an insert. 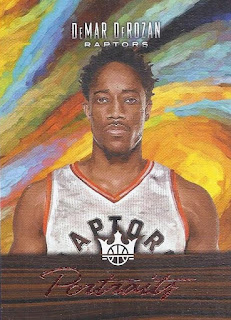 Only 35 points last night against Chicago? Has been! 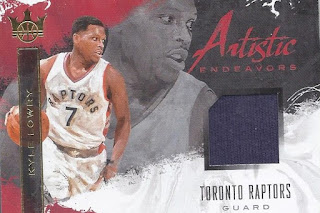 The hits start with this simple swatch from Kyle Lowry. 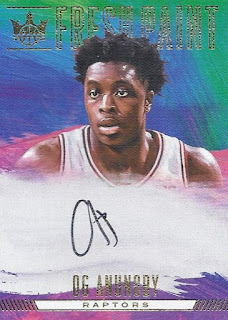 And the hits end with the autograph of OG. I actually landed two of these, both from this subset. One to keep, one for the COMC inventory. Given I've now landed an on-card auto of his to join the stickergraph, and given his penmanship really isn't too memorable, I think I'd rather chase relics of his the rest of the way home. 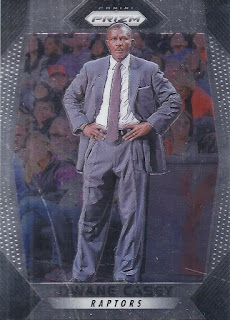 I also got some cards from a partial case of Prizm. While I did get the team set, I didn't land any hits for the collection. Still, I like (and I might be one of only a few who do) that coaches showed up in this set. He just got named Coach of the Month in the Eastern Conference, so I figure his entry should be highlighted as well. This is my second card of Casey, as he also had one in 2012 Hoops.

I promise that tomorrow will be a Raptors-free post, after 3 straight with Raps content.
Posted by buckstorecards at 10:30