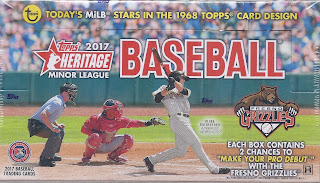 The collation of base cards between the two boxes wasn't exactly ideal. I think there were about a dozen or so needed cards in this box for the regular base set. At least that means my trading partners will eventually get some base from this set in their envelopes at some point.

At least the SPs weren't dupes. Riley Pint sounds like a create-a-player name from Madden. 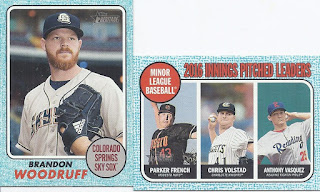 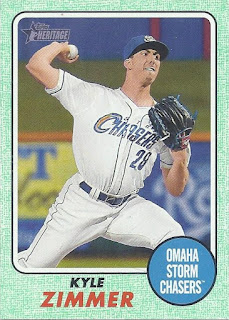 And your green parallel.

Jays content among the Baseball America inserts with Vlad Junior. At least that Eloy Jimenez isn't the same photo as on his base card/auto from that last box. 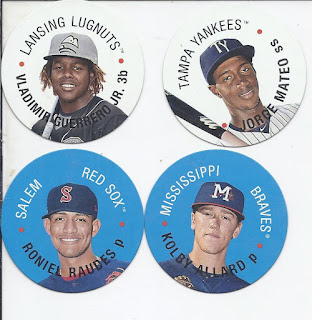 More Vlad Jr. among the discs! 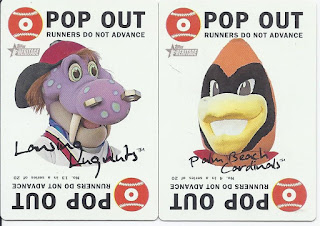 Does getting a mascot from the Jays affiliate in Lansing count as a Jays card? If so, then Big Lug makes its debut in my collection. Robbie the Redbird represents Palm Beach. 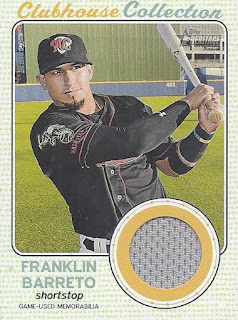 A former Jays farmhand makes an appearance on the relic. He went to Oakland as part of the Josh Donaldson trade, and made his big league debut last season. 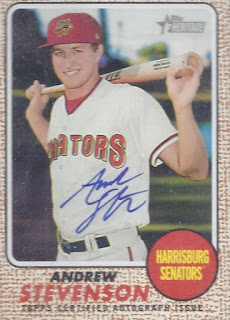 Ditto for the auto's subject as Andrew Stevenson also made his debut this year with the Nationals. I hadn't heard of him, but he has to be one of the few players to pick up his first RBI when receiving a bases-loaded walk. And of course that was against the Mets. Why wouldn't it be?

And that's the other box. I might pick up a third at a later date to see if I can do some damage to the base want list.
Posted by buckstorecards at 13:11