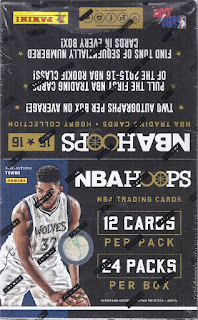 A nice day to bust a box of something. Lots of stuff dropping this week for set building fun. Update. CFL. And this. I thought this would be the product I would be least likely to find at the Expo in about 2 weeks, so this was what I grabbed.

Up first, the base cards. 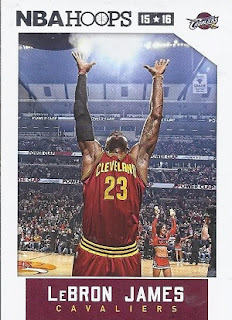 Perhaps a little smaller photo-wise than previous years, but the layout is familiar. Stuff on the top, with the logo keeping it from being perfectly rectangular. Stuff on the bottom. As shown by this Lebron, there are some really nice photo choices in this year's set. 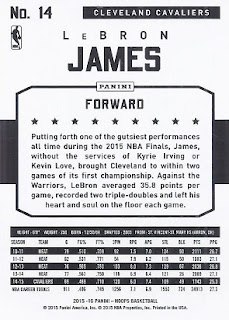 Unfortunately, the stats on the back are cut down to the past 5 seasons. On the plus size, it does mean that each player earns a paragraph bio. 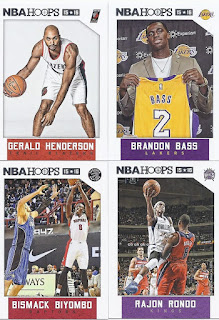 Players that switched teams get several options to acknowledge their move. Posed shot. Press conference shot. Traded/signed update on the side. Or a photoshop special, since I can't recall Biyombo's performance as a Raptor against Orlando from last season. I'll have to take a look to see how many others got that treatment, since that was the only one that stood out to me as I was collating. 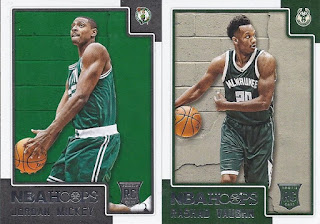 Every rookie card is pretty much the same. A fake action shot against a green screen-ish wall backdrop done in the team colours. Sometimes they look good, such as with Milwaukee. Sometimes, the background overpowers the player, like with Boston.

The updated logos appear in the upper corners of their expected cards. That's a nice little bonus.

Parallels are a lot less frequent in this year's packs. I could count on one per pack, maybe more last year. This time, not so much. 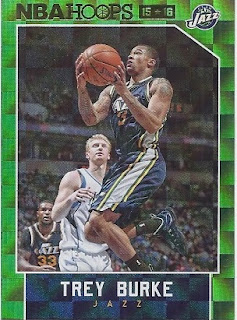 Only one green bordered card. Of course, this Wolverines alum will be set aside for Too Many Manninghams. I knew I couldn't bust a box without getting at least one. 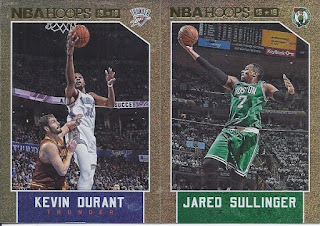 Only 2 gold cards this year. A major name, and a Celtic. I'm happy with these.

The silver parallels are all numbered to /299. My box might have had a pattern with its collation, as these cards were numbers 162, 172 and 181 in the base set. I guess I'll have to look at other box breaks to see if this was just a coincidence. 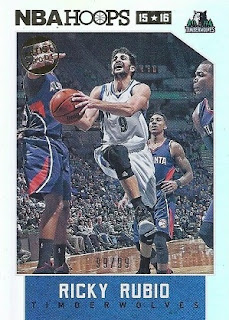 But, there's a sampling of the base cards in this. Tomorrow, the inserts.
Posted by buckstorecards at 13:18