Time to wrap up this week(days) of cards associated with the National breaks with goodies from the plethora of silver packs that showed up. 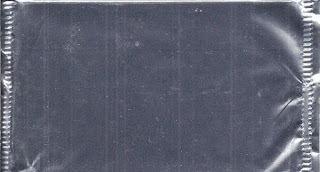 These are usually opened on camera during the breaks, but this time, likely due to time constraints, they arrived unopened. So, these bland silver wrappers were flying around Chez Buckstorecards. 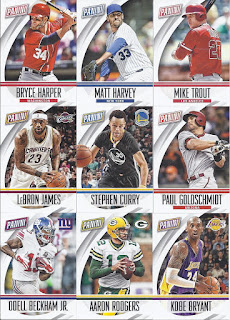 These are the unnumbered base cards. When limited to 21 subjects, I can't really disagree with any of these being included. 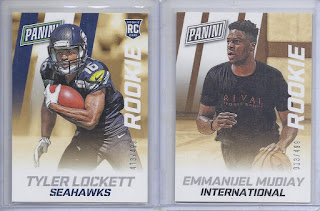 As you continue through the base, the higher numbered cards are limited to /599. Tyler had a 103 yard TD return during the preseason, and picked up his first regular season TD on a punt return during Week 1. Mudiay was the 7th pick in the NBA Draft, going to Denver. 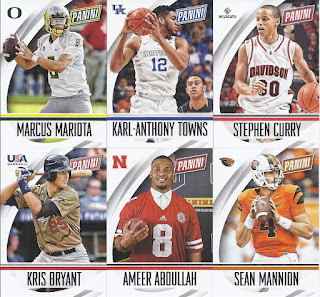 There are some NCAA parallels in the base set as well, though Kris Bryant on Team USA seems like a strange choice. But it does get him in the set. I really like the Stephen Curry, since it gives an appearance to a NCAA school that rarely makes sets (except for cards of Stephen Curry). A Duck collector who I often send cards to will be happy to learn I got 2 of the Mariota cards, so one will be in the next package I send out. 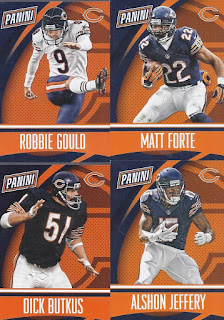 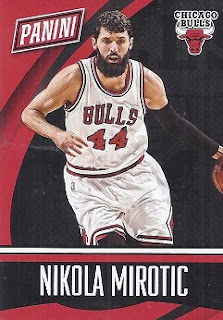 Seeing the National was in Chicago, the Bulls and Bears each got 5 cards as part of the Team Colours subset. I'm really happy to get a colourful new Alshon for my 2/14 collection, and I'm really amused to get a card of a kicker in that. Mirotic was the only Bull I got from that, but at least I got 3 of them. Pippen, Noah, Butler and Gasol were the other options. The other logical one, Derrick Rose, was in the base set. 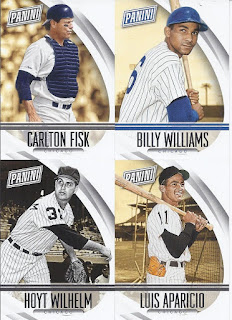 Baseball was represented as part of a Chicago legends 10 card subset. I got 2 of the Fisks, so someone in search of 2*3 Heroes might want to check a PWE that is on the way for the other one. I'll probably hunt the Jenkins from this set from COMC. 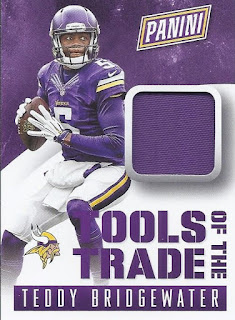 And to end this, nothing but the hits. All two of them. There was this very purple Teddy Bridgewater, and 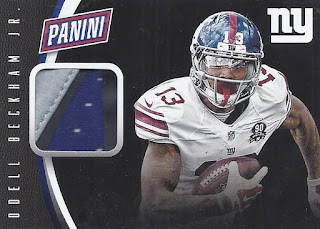 this three colour glove swatch from last year's top rookie. This is my first football glove piece, and I will enjoy adding it to my collection of non-jersey football relics. Turf. Goalpost Padding. Facemasks. Now this.

I didn't say that this collection was extensive. Just that I have one.

Tomorrow, a repack. I promise.

Posted by buckstorecards at 12:22