It has been too long since I devoted a Sunday post to something alliterative like the Sunday Surprises, so why not today? To recap, these are small bags (formerly easily searchable boxes) with various card related items in them, such as supplies, lower end packs, or 4-8 card sometimes-themed repacks. No supplies this time - just cardboard. 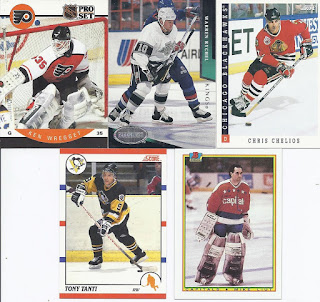 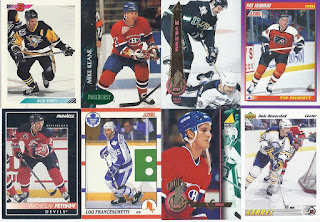 Next up, a 90s pack, which usually translates to "8 junk wax era cards". And it did, but there was an emerald parallel, as well as one of the more fun names to say in hockey history - Lou Franceschetti. He was with Washington for most of the 80s, but didn't get a card until his time in Toronto. 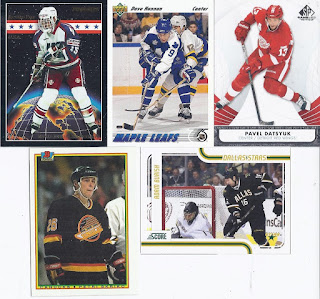 The 5 pack with a guaranteed Superstar was another bland one. This one gets saved by the interesting use of a horizontal format with the Burish. 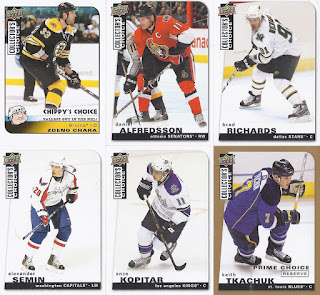 Finally, a pack of Collector's Choice. And it is this that saves this particular pack. The Alfie is a dupe for his collection, but not my Senators collection. The Chara is a nice insert, and the gold bordered Prime Choice Reserve is a pretty tough pull, usually ending up at about 1 or 2 per box. 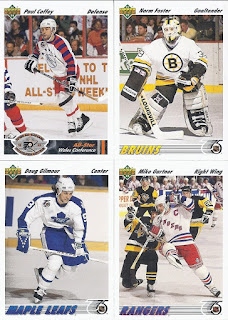 I'll stay with the packs here, and start with a pack 1991-92 Upper Deck High Series. There's a Kitchener Rangers alum, the only NHL-level card for Norm Foster, one of Doug Gilmour's first Leafs card, and one of my favourite action photos from the set. 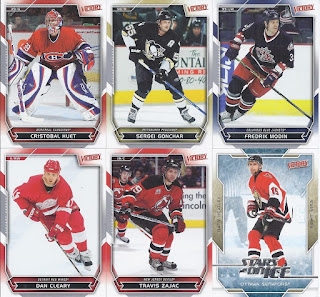 Your last pack within the repack was this 07-08 Victory. At least I pulled a Senators insert. 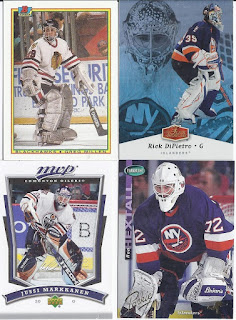 At least one mask binder card is all I ask from a goalies pack, and I pulled two. The Hextall is the third parallel of this break, as it is one of the Gold Parkies. That's enough to add this plain mask to the misc binder. 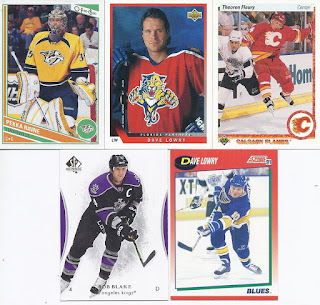 And a much better HOF pack this time, where the HOFer is the least interesting to me. A Rinne for the mask binder, another one of my favourite early UD hockey photos, and a pair of cards of 2-14 babydave Lowry. The Score isn't a need, but the UD card sure was!

I definitely got $4 worth of fun out of this one.
Posted by buckstorecards at 08:48