The Prestige portion of the National breaks are done, but there were bonus packs also associated with the breaks. These were randomly distributed and I ended up with 2 packs of 2014 Bowman Platinum Asia Edition, and several packs of 2015 Panini Stars and Stripes. 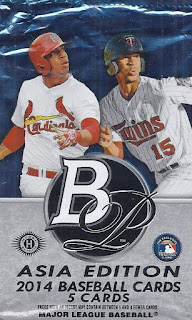 I'm surprised there is only English on the package. 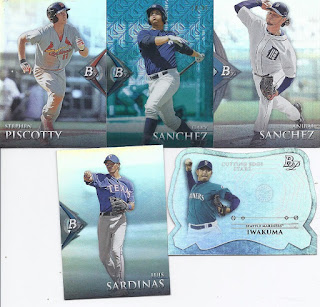 And I pull one of the Asia-exclusive cards in the first packs. That Gary Sanchez is a Japan Fractor and is numbered to 35 copies. A nice addition to my collection of numbered cards. 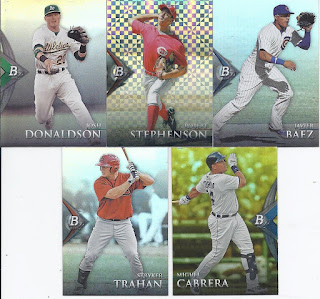 More shiny stuff in the second pack, but nothing Asia exclusive in this one.

I didn't keep the USA packs separate, so I'll just hit the highlights from the 5 packs that I got. 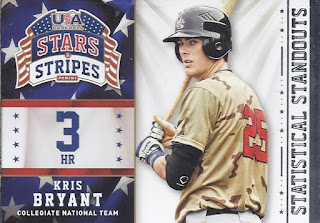 I heard this guy is actually a big deal. 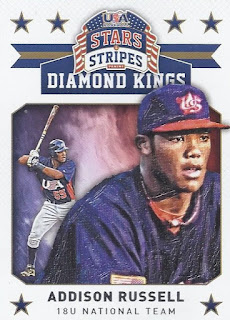 As is this guy. 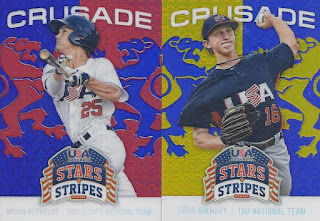 The Crusade cards are in this release as well. The yellow and blue are not numbered, but the red and blue version is /49. I just wish the names were more legible in the scans. 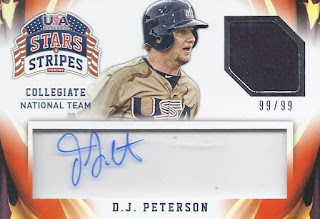 And the only true hit from the packs came from one of them. This is from the mouthful of a subset called  Stars and Stripes Materials Signatures. I like the camo jersey on the photo, but despite this guy making a lot of appearances in Bowman products, I still think of the guy from dying days of AWA with the same name.

And there's the bonus regular packs.

But I still have the Panini National silver pack to get to.

And then I'll be back to regularly scheduled repacks.
Posted by buckstorecards at 07:14