This has happened before. There's a couple of autos I'd like in my PC, but they're part of a lot. So, I grab them, and send the others to my COMC account. Although I did have a home planned for one of the leftovers, it was a dupe for my intended target. 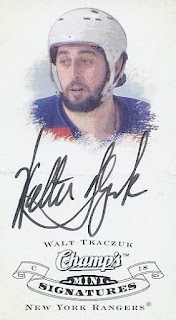 All of the cards were Champ's minis. That's another plus, since that means they'll also all be on-card. This was my first of the wants, adding an auto of former Kitchener Ranger Walt Tkaczuk. He spent his entire NHL career as a member of the New York Rangers, meaning that, except for a few games in the minors, he played his career with teams named 'Rangers' (There's no affiliation between the Kitchener and New York squads). Out of the 1076 games listed at hockeydb, only 8 were played wearing a uniform other than a Rangers one. 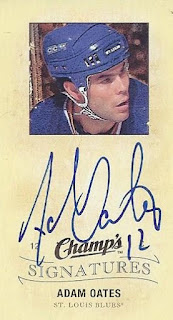 Second up, howzabout an on-card autograph of a Hall of Famer? The more affordable half of the Hull and Oates duo. 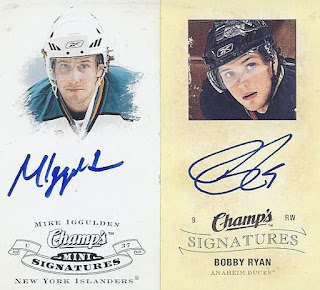 I had planned to ship that Bobby Ryan off to Greg @ P,TSiA, but I searched beforehand and found out that it would be a dupe for that collection. So, it joined the Mike Iggulden in my COMC mailer. I had never heard of him before, but he played 1 game for the Sharks and 11 for the Islanders, thus explaining the uniform not matching the team name on the card.