Trade with Justin @ The Hopeful Chase

When I send people commons to help complete their sets, I usually just ask for random Blue Jays or Mets in return (or, if it is hockey intensive, Senators). I sent off a pile of early 90s Topps and a handful of 2011 Score hockey. Let's look at what comes back in return. 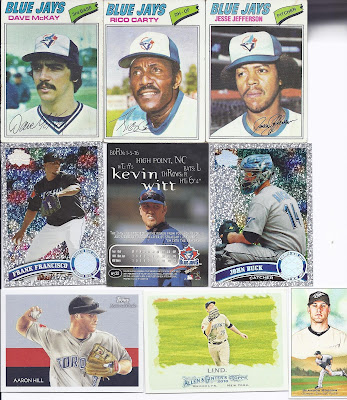 We've got some 1977 Blue jays cards, complete with airbrushed logos. And 3 players on my unofficial want lists for various reasons. The first Canadian to play for the Jays, an early belter for the Jays, and an always welcome baseball cap covering an afro. There's also an instance where for probablythe only time in history, a poem was written about Kevin Witt. We've got a sweet, shiny, John Buck card with the bonus of it not being one of the chopped/brushed ones from later in the year where his great Jays helmet is changed from a design worthy of an NHL mask to a generic Marlins one. Wrapping it up, there's also a nice Morrow mini.

Now for the Mets portion of the trade. 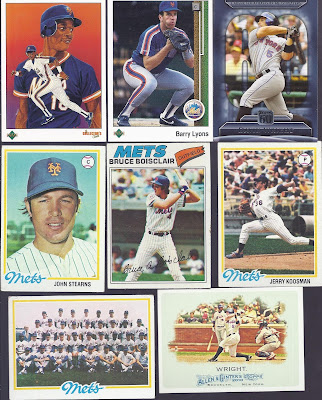 Firstly, the Blue Jays influence crosses over here with the checklist card. The artist? Vernon Wells Jr. Father of former Jays star and leaden contract holder, Vernon Wells III. The Koosman card is really nice, especially because the Mets set from that year didn't have a lot of action shots. Plus, how can one go wrong with a team photo checklist.

Posted by buckstorecards at 13:58